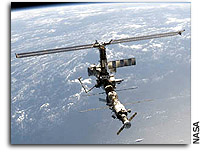 All ISS systems continue to function nominally, except as noted previously. Second weekend rest day for the crew.

Later in the day, the crewmembers were scheduled for a public TV downlink to Moscow with greetings to flying enthusiast Aleksandr Begak. He is currently setting up for a highly publicized flight from St. Petersburg to Moscow in his paraglider "Scarab", at an altitude of about 400 m, on Russian television. [The downlink included a scripted "serpentine" chat with the pilot, whose responses are to be recorded separately and inserted into the pauses left by the crew. "We believe that the St. Petersburg-Moscow flight will not only bridge these two cities on the planet, but also thousands of hearts that love flight and the open sky. May the winds be at your back, Sasha Begak!"]

The next major educational/PAO event for the crew is an interactive audio/video Q&A for the International Toys in Space Project at the Houston Museum of Natural Science and the American Museum of Natural History in New York City on 7/16 (Tuesday). During the live event, Peggy Whitson will demonstrate a number of common toys in zero-G (boomerang, jump rope, AstroJax, Kendama, marbles, yo-yo), currently stored in the Lab, and respond to questions by the attending middle school students.

Dual-angle testing of BGA (beta gimbal assembly) 2B is continuing via S-band. The current LVLH (local vertical/local horizontal) earth-oriented flight attitude will be maintained until tomorrow. Attitude will then transition again to sun-oriented XPOP (x-axis perpendicular to orbit plane).

After some down-time of the Vozdukh carbon dioxide scrubber on Friday morning, the machine is back in operation. CO2 levels, which had risen to close to 5 mmHg, are back within acceptable limits. To make sure, the crew was requested to call down this morning's CO2 readings from the CDMK (carbon dioxide monitoring kit) as well as a VAJ (vacuum access jumper) pressure reading. Repair work on the CDRA (carbon dioxide removal system) in the Lab, an eight-hour job for two crewmembers, will begin tomorrow (7/15) and continue to 7/16.

The regular weekly data dump of all C&C MDMs (command & control computers) and all powered PL MDMs (payload computers) is planned for tonight, via S-band. This will include items such as HRDL (high-rate data link) S-RAM, CCS bad sector data and the non-ground command log. Later, selected BDTs (binary data tables) will be dumped to the ground. No crew involvement is required.

CDR Valery Korzun's task-listed Uragan earth imaging sessions with the Kodak 760 electronic camera with f800-mm lens and the LIV television camera today had the following targets: the Balkans along the Adriatic, west and south coasts of Turkey (Asia Minor), Cyprus, largest cities in Israel, the Spanish city of Palma on Mallorca Island, the Nigerian city of Abuja, ruins of jungle villages left by an ancient Indian civilization, the Kuril Islands, and the city of Yuzhno-Kurilsk.

Today's optional targets of the U.S. CEO (crew earth observation) program were E. Mediterranean Dust and Smog (stable weather conditions over the eastern Med favored smog formation at the time of this pass. As ISS crossed the coast of northern Greece, the crew was to look obliquely to the right of track to document the thickness and extent of visible aerosol palls over the water, continuing until the coast of Israel was reached), Canary Cloud Vortices (a persistent weather pattern over the eastern Atlantic this summer continues to drive large fields of low stratus clouds past the peaks of the Madeira and Canary Islands. Of interest on this pass: looking obliquely to the right of track to document the stream cloud vortices generated downwind from these islands), Congo-Zimbabwe Biomass Burning (this was an excellent pass across the length of Zimbabwe in almost clear weather. Of interest: to begin a mapping pass of this country's complex and poorly mapped patterns of vegetation and land use, particularly noting burn scar patterns), Industrialized Southeastern Africa (with a weak offshore flow into the Indian Ocean, crew was to look to the right of track as they crossed the Mozambique coast for palls smoke and industrial aerosols) and Eastern United States (this pass was through the heart of the most likely region of smog over the eastern U.S. at this time of the year. The crew was to try for oblique or limb views either side of track).