Today, like everyday, I had two scheduled exercise sessions. That's because exercise up here is even more important than it is on the ground. On the ground you get a lot of exercise without even knowing it because your body is constantly working against the force of gravity. Your muscles and bones have to support your own body weight all day long. Up here, as far as your muscles and bones are concerned, life is just effortless. Since we hardly have to exert any effort to get around in space, we have to maintain our fitness levels by working out twice a day. Our trainers on the ground, Jamie and Beth, design my space workout program and keep track of my progress.

Besides just our aerobic fitness levels, we also have to deal with about bone and muscle loss. I remember back when I had a major knee operation many years ago and basically didn't use my leg muscles for a few weeks while I was in a cast. When they took the cast off, my right leg was about half the size of my left leg. It was amazing how fast the muscles had atrophied. The same process of muscle loss occurs in space if the muscles aren't being used, and is one of the big medical challenges associated with long-term space flight. Astronauts also lose bone density in the major weight bearing bones (hips, lower back, femur, etc.) during long-duration space flights. This loss of bone density is similar to the bone loss that often occurs in the elderly (osteoporosis), and is one of the reasons many older adults suffer broken bones in falls. The reasons for the bone loss in weightlessness (or due to advancing age for that matter) aren't totally clear, but we do know that it has something to do with the fact that your body is constantly rebuilding your bones, and that this process is affected by how much mechanical load is carried by the bones. If you are looking for something to do, figure out how bears and other animals that hibernate manage to not lose bone and muscle strength even though they don't move for months, then figure out how to make it work for humans. You'll be a hero!

These are problems that must be overcome when we eventually (hopefully, in the not too distant future) take long voyages around our solar system such as to Mars or to asteroids. When landing on Mars, the astronauts will need to be ready to start work immediately after reaching the surface of the planet and will not have time for months of rehabilitation. Luckily, the solution to the problem in space is the same as it is on Earth, namely exercise. We have some indications that we may be close to solving the problem. In fact, one of our main goals this mission is to see if we can replicate the very good results obtained by some previous ISS crew members in preventing bone and muscle loss. If that wasn't enough motivation, I made a bet with Peggy Whitson (Expedition 5 astronaut) that I would beat her bone density loss measurements! The motivating factor isn't so much the one dollar we have riding on it, it is knowing that Peggy will never ever let me forget it if I come back with greater bone loss than her (not that I don't have similar plans if I win the bet!).

We rotate our workouts through four main pieces of exercise equipment on ISS: a treadmill, 2 stationary bikes, and an apparatus that allows you to "lift weights." The treadmill is a 900-pound monster that resides in the Service Module (unfortunately right next to our dinner table). The treadmill is so big because it isn't bolted to the floor, but rather is loosely suspended inside a pit in the floor and has a big gyroscope inside that stabilizes it while you run. This is to isolate the vibrations from your footsteps so they don't shake the Station around. In effect, you are running on a floating treadmill. It might seem strange to think that a person running could shake a 200-ton Space Station, but in fact it can. On my first space mission we visited the Russian Mir Space Station, and I remember watching a crew member run on the treadmill there (which was hard-mounted to the floor). As they ran, you could feel the oscillations reverberate through the Mir, and in fact you could actually look outside and see the big solar arrays actually move up and down. For those of you who know what resonant frequencies are, that was what was going on. To prevent this, the elaborate treadmill system was developed and is used on ISS. It is kind of interesting running on the treadmill because the "floor" underneath your feet moves around a bit, like running on the deck of a small boat.

You might be wondering how we can actually run since we are weightless - the answer is we wear a harness (that fits like a backpack harness) that is connected to the treadmill with bungee straps. There is, however, an important difference between running here while being strapped to the treadmill and running on Earth. If you load up the bungees so they pull down with a force equal to your body weight, all that force is transferred by the harness to the contact points on your shoulders and hips, which can get pretty sore after running for a while. The fit of the harness depends on your body shape, and I've been trying various adjustments of the straps to improve the fit while the engineers on the ground work on a better design. The main purpose to the treadmill, of course, is to work out those walking and running muscles that would otherwise go unused up here. To get a good aerobic workout, I walk for a mile, then run a couple of sets of half a mile each, then walk for a while longer. The pounding from the running may be helpful for preventing bone loss in the hips and legs, although the astronauts who flew on the Mir Space Station ran on the treadmill there and still suffered significant bone loss. In any case, I do four workouts a week on the treadmill.

We also have two stationary bicycles, one American built located in the Laboratory Module, and a Russian built version located in the Service Module. The riding motion is a little different than what you might have in a gym on the ground since you don't actually sit on a seat. The great part about the bicycles is that they are mounted facing the two largest windows on the Space Station, so while you ride the bike you can look out the window and watch the world go by. If you ride the bike for 90 minutes, you can ride all the way around the world - so Lance Armstrong eat your heart out! I ride the bike four times a week, and do a variety of workouts from intervals with bursts at high resistance, to longer workouts at lower resistance. We have a heart rate monitor that records your pulse, and I send the data down to the ground so Jamie and Beth can see that I'm not slacking off. The bike is mainly for aerobic exercise, and in fact we measure our aerobic fitness each month by riding a set resistance profile while wearing heart and blood pressure sensors. My first fitness evaluation was after being up here for just two weeks, and it showed about a 20 percent decrease from my pre-flight level, which was pretty typical. At that point your body is still getting used to weightlessness, and the first week is typically so busy you don't have much time to exercise. Since then it has improved steadily so that now I'm almost recovered to my pre-flight fitness level.

The piece of equipment that I use the most goes by the acronym RED (resistive exercise device), which is our version of lifting weights. It is two canisters, each about the size of a watermelon, that are bolted to an aluminum plate. Inside each canister is a cord that wraps around a spiral pulley that unwinds as you pull the cord out. The resistance is provided by a stacked series of disks with rubber spokes inside the canister connected to the spiral pulley. The whole assembly inside the canister winds up like a rubber band-powered toy as you pull the cord. You choose the resistance level by turning a crank that winds the disks in the opposite direction. The canisters can be loaded up to about 120 pounds on a side. You can also add some bungees to increase the resistance of each can to about 190 pounds, so the maximum "weight" you can exercise with is about 380 pounds. We have a bunch of attachments like bars and harnesses that connect to the cords so you can do various exercises. This is the device that seems to make the most difference with respect to overall strength and reducing bone loss. The idea here is to workout at near maximum strength using the major weight bearing muscle groups (hips, lower back, and legs). The concept is familiar to athletes and weightlifters in particular - if you want to get stronger, or at least not lose strength, then you need to have some workouts at near maximum effort. I use the RED six times a week, with workouts consisting of squats, single leg squats, dead lifts, heel raises, bench press, upright rows, abdominal crunches, and leg extensions. I also do some exercises that are familiar to wrestlers, namely holding a position similar to a good wrestling stance for several minutes, which works out the thighs and hips. All those years of drilling takedowns have paid off! An interesting side note is that amongst the astronaut corps, I know of at least 12 who were former wrestlers, and seven of us competed at the collegiate level. Of those, five of us were actually high school wrestling coaches before we became astronauts. There are also a number of cosmonauts who are ex-wrestlers. So it seems if you want to become an astronaut, wrestling is a good sport to be involved in!

We'll see how I fare after the mission when they measure our fitness level, strength, and bone density. If indeed we are able to control, or at least greatly reduce the amount of degradation, then we may be on our way to solving one of the big medical problems with going to Mars. 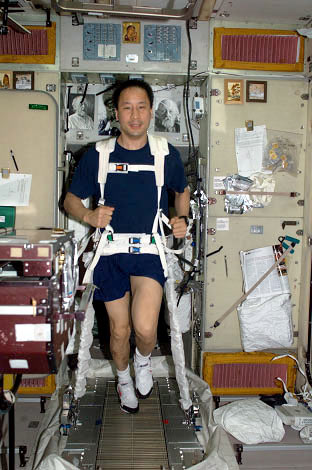 Running on the treadmill: the entire treadmill below my feet is floating in a big pit in the floor. 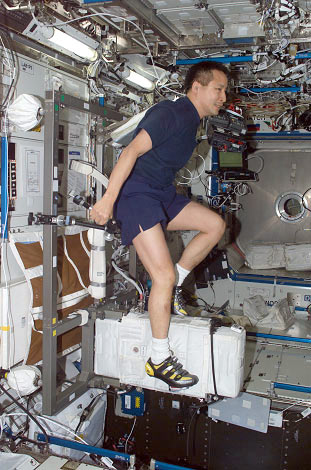 The bicycle: You can't see it in the picture, but below my feet is the largest window on the Space Station. 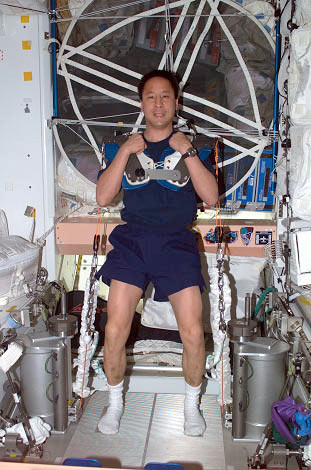 Squats on the RED machine. The orange cords pull out of the bottom of the canisters. You can see I've added two white bungees to increase the load.