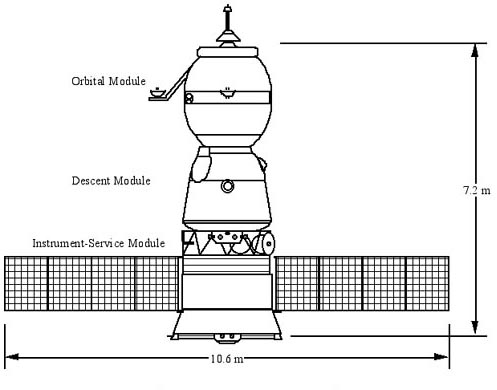 The Soyuz TM spacecraft is composed of three modules: Orbital Module, Descent Module, and Instrument-Service Module. The three modules remain connected throughout the mission until after the deorbit maneuver. During ascent and orbital flight, a form-fitted thermal insulation blanket covers all three modules except for the radiator, solar arrays, and antennas. The Soyuz TM modules are illustrated in Figure 2. 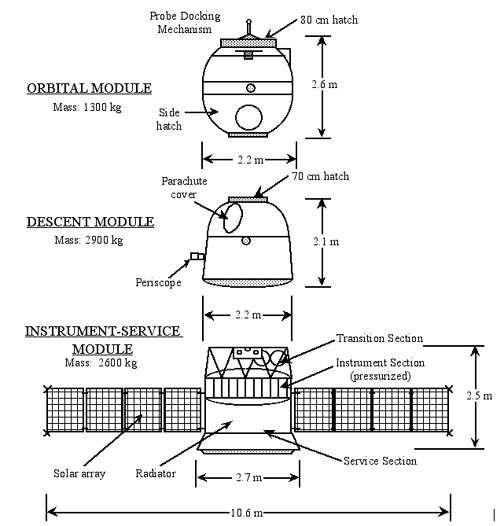 The mass of the descent module is 2,900 kg and its habitable volume is 4 cubic meters. Approximately 150 kg of payload can be returned in the descent module. The primary and backup parachute containers and the area that houses the hydrogen-peroxide propellant tanks are separate pressurized volumes with their own access covers.

The descent module is the only portion of the Soyuz TM spacecraft that returns intact to Earth. After landing, the crew leaves the descent module through its single top hatch, usually with assistance from the recovery team.

The instrument-service module (ISM) is analogous to the Service Module on the Apollo spacecraft. The instrument-service module has three sections. The transition section provides the structural attachment to the descent module and contains oxygen storage tanks and attitude control thrusters. The instrument section is a cylindrical pressure vessel containing avionics, communications, and control equipment. The service section is the structural interface with the launch vehicle and includes the propulsion system, batteries, solar arrays, and radiator.

The propulsion system in the instrument-service module performs all orbital maneuvers including those needed for rendezvous with the space station and the deorbit maneuver at the end of the mission. The propellants are nitrogen tetroxide and unsymmetric-dimethylhydrazine. The propulsion system shares its propellant tanks with the reaction control system that provides attitude control throughout the orbital phase of flight.

Two solar power arrays are attached to either side of the aft section. The solar arrays are linked to rechargeable batteries. The arrays fold against the spacecraft body for ascent and when deployed, resemble wings. Once the solar arrays are deployed, they cannot be folded again. There are a number of antennas and other sensors located on the exterior of the instrument-service module and on the solar arrays.

The instrument-service module separates from the descent module following the deorbit maneuver and disintegrates during entry into the atmosphere.

Depending upon the orbital mission, the crew of the Soyuz TM can consist of two or three people:

- vehicle commander in the center seat

- flight engineer in the left seat

- cosmonaut-researcher in the right seat (on three-person crews)

The vehicle commander is responsible for leadership of crew activities and overall mission success. The flight engineer is responsible for operation of spacecraft systems and implementation of flight procedures. The cosmonaut-researcher executes instructions from the commander for spacecraft systems operations, communicates with ground control, and conducts photography, videotaping and television broadcast sessions.

Size requirements, shown in Table 1, have been established for crew members who will fly in the Soyuz TM. These requirements result from limits in cabin volume and overall vehicle mass and the design of the shock-absorbing seats. The height and weight limits do not include suits.

About two hours before launch, the cosmonauts enter the Soyuz TM on the launch pad through the side hatch in the orbital module and then crawl through to their couches in the descent module. Ground control personnel observe the cosmonauts’ medical parameters and can track the crew’s activities using television monitors. The spacecraft is launched within an aerodynamic shroud by an expendable launch vehicle. A solid rocket launch escape system is located in a tower on top of the shroud. The Soyuz TM, its launch shroud, and launch escape tower are shown in Figure 3.

The launch vehicle, also known as Soyuz, is a derivative of the launch vehicle family that launched every piloted Soviet or Russian mission and many other satellites going back to the original Sputnik. All Soyuz missions have been launched from the Baikonur Cosmodrome in Kazakhstan which is at a latitude of 45.6 degrees North. The Soyuz TM spacecraft are launched to the orbital inclination of the Mir space station which is 51.6 degrees. The altitude of Mir ranges from 325 to 350 kilometers.

The process to rendezvous with the space station normally takes about two days. During the final phase of docking the crew remains in the descent module in their pressure suits. After docking, the crew can move into the station through the hatch at the front of the orbital module. Soyuz TM spacecraft have remained docked in orbit for up to six months.

At the conclusion of the mission, the Soyuz TM spacecraft separates from the station and performs a deorbit maneuver. After the completion of the deorbit burn, the orbital module and the instrument-service module are separated from the descent module. All three modules descend separately but only the descent module is designed for controlled descent and recovery.

Soyuz recoveries normally occur on land in Kazakhstan. There are provisions for emergency water recovery but there has only been one instance of a water landing for Soyuz. In 1976, Soyuz 23 accidentally landed in a frozen lake. The spacecraft and crew were recovered.