While NASA continues to represent the American public's aspiration to conquer the final frontier, it is indeed the Department of Interior that remains the steward of the wonderful land and waters that make up America's frontier here on Earth. The President and, indeed all Americans are most grateful to you Secretary Norton for your steadfast leadership to preserve these national treasures. And the opportunity today to recognize such an important element of those national treasures in memory of the Columbia crew is really an incredibly humbling and remarkable event that we treasure a great deal.

I also appreciate the presence of Leo Dillon, Robert Hiatt and Roger Payne from the U.S. Board of Geographic Names, and thank you for your diligence and hard work in helping to make today's event possible. It really is a very special moment for all of us in the NASA family.

I would like to recognize as Secretary Norton some very special guests, Columbia astronaut Dave Brown's parents, Judge Paul and Dorothy and his brother Doug, who we count as extraordinary members of the NASA family.

Dave Brown was an exceptional human being. And as much as I knew of his reputation and had met him a few times, I came to know him much, much better at the Memorial Service for him at the Arlington Cemetery in the middle of March. It was the most remarkable eulogy I think I've ever heard at a memorial service. Because it celebrated his life and what a remarkable human being he was. And this guy was amazing, like many of the astronauts.

Scott Parazynski like him represents an extraordinary group of folks in the astronaut corps, who seem to when you look at their resumes have a combination of experiences that you would swear represent the experience of at least three people you know all jammed into one individual. They are all very characteristic in that regard.

But beyond all the remarkable experiences he had and the amazing professional avocations that he had pursued, Dave Brown was on top of lots of other things quite a character in many regards. The gentlemen who eulogized him relayed a series of incidents in which every time there was some kind of adversity, or crisis, or challenge or some unanticipated event, Dave had a refrain each time in which he always intoned, "Isn't this great!" If Dave were here at this moment, and in spirit he is, he would view this as, "Isn't this great!" And that would be exactly his retort.

He spoke to the students of his alma mater, he went to William and Mary, and challenged them to have "a big vision, accept the risks and be persistent in pursuit of goals." He pretty much described the qualities that he demonstrated throughout his life. No fatigue ever confronted him in this regard.

I'm certain he inherited those qualities from his parents, and we are extremely honored to have them with us today.

A couple months ago, several of the family members were on hand when the crew of STS-107 was awarded the prestigious Robert Goddard Memorial Trophy on behalf of a grateful nation.

The citation on the Trophy offered the aerospace community's profound thanks for this remarkable crew "for reminding the Nation and the world on their ambitious Space Shuttle science research mission that great lives are defined by great purposes." The citation goes on to say "the courageous Columbia astronauts will be forever remembered for their joyful and determined pursuit of knowledge on behalf of all humanity."

Joy and determination. Those are the two words used most regularly in these citations and are indeed the characteristics that vividly stand out as we honor the mission of seven remarkable crewmembers?Rick Husband, Willie McCool, Mike Anderson, Dave Brown, Kalpana Chawla, Laurel Clark and Ilan Ramon?by formally giving the name Columbia Point to a prominent vista on the east side of Kit Carson Mountain.

Thanks to the good efforts of the Interior Department it is quite fitting that Columbia Point will now be a part of Colorado's beautiful Sangre de Cristo range next to the Challenger Point, among a group of mountains known for their enthralling beauty.

What better place could there be to honor the tremendous spirit and unquenchable thirst for knowledge of our Challenger and Columbia astronauts?

It is also important to note the observation of famed nature photographer Art Wolfe that "Colorado is home to the stunning grandeur of mountains 100 million years in the making, the mysteries of ancient dinosaurs, and even to an incongruous natural oddity?a sea of sand far from the lapping waters of an ocean."

He was referring to of course the Great Sand Dunes, America's newest National Park, which adjoin the range that now hosts Challenger and Columbia points. When you think about it, this stunning part of Secretary Norton's home state is most evocative of many of the features our Mars Exploration Rovers Spirit and Opportunity will soon explore on Mars, as the adventure without end that we call space exploration continues in this Centennial of Flight Year. And spirit just launched moments ago successfully on its way to Mars.

Today, though, our focus is indeed on the good earth, the place that from his vantage point on the Space Shuttle Columbia Dave Brown emailed his parents, "If I'd been born in space I would desire to visit the beautiful Earth more than I ever yearned to visit space."

And as we look forward to folks having the opportunity to hike up to the top of Columbia Point in tribute to as fine a crew as ever has been assembled, Columbia Point will be enjoyed and treasured by the American people.

I certainly hope to some day to bring my kids to the base of the range right before dawn on a summer's day, when a majestic sea of stars hovers overhead these majestic peaks, prior to first light when hawks and other raptors rise on the early morning thermals.

Perhaps my kids will also be privileged to travel in space and be able to look down and see a point worthy of the name Columbia, and of the crew members Rick, Willie, Mike, Dave, Kalpana, Laurel and Ilan, who delighted in viewing our planet's purpled mountain majesties while they carried forth their joyful mission of exploration and discovery.

It is now my great pleasure to introduce an astronaut extraordinare, Scott Parazynski, a veteran of four Space Shuttle missions. Scott, who hails from Evergreen, Colorado is an avid mountaineer who has climbed 48 of Colorado's four-teeners, as well as the tallest mountain in the world outside of Asia which he will pronounce with greater clarity than I ever could. His love of mountains gave him the inspiration to suggest this wonderful idea and we are grateful to Secretary Norton for accepting one of the best ideas to come from NASA. Please welcome astronaut Scott Parazynski. 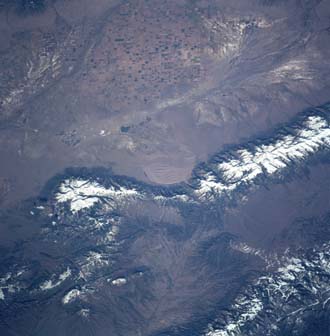