Using archived science verification data from the Hokupa'a/QUIRC Adaptive Optics system on Gemini North, a French/US team of astronomers led by Jean-Pierre Maillard of the Institut d'Astrophysique de Paris has confirmed the physical association of a cluster of massive stars in the infrared source IRS 13 near the center of the Milky Way galaxy.

The team also used data from Hubble Space Telescope, the Chandra X-Ray Observatory, the Canada-France-Hawai'i Telescope (CFHT), and the Very Large Array to complement the Gemini data. The Gemini observations consisted of deconvolved H and Kp band images that identified the existence of two formerly undetected sources within the eastern component of IRS 13 (called IRS 13E). When the Gemini data were used in conjunction with longer and shorter wavelength observations, it was possible to conclude that these sources were massive stars comparable to the stars of the same type which are exceptionally concentrated in the vicinity of the main black hole at the galactic center (which has a mass of about four million solar masses).In all, seven individual stars of IRS 13E were seen within a diameter of about 0.5" (corresponding to 0.6 light-year across). These stars are co-moving westward in the plane of the sky with a similar velocity of about 280 kilometers per second. 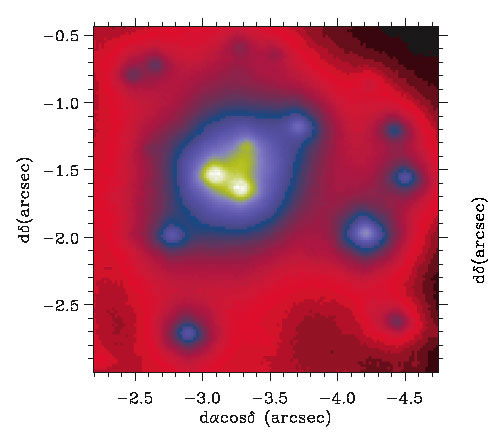 The compactness of the cluster and the common proper motion of the components suggest that they are kept together by a massive source, which is thought to be an intermediate mass stellar black hole at the center of IRS 13E. The size of the cluster allowed the team to infer a mean orbit radius for the cluster and radial velocities of individual stars. These velocities were derived from the BEAR Fourier Transform Spectrometer (CFHT) which allowed the determination of an estimated average orbital velocity to within an accuracy of +/- 30 kilometers per second.  The authors then explored a range of orbital assumptions and were able to rather robustly constrain the mass of the holding black hole to about 1,300 solar masses.

The team also speculates that this cluster was once located farther from the galactic center, where the stars could form away from the extreme gravitational influence of the central supermassive black hole. IRS 13E seems to be the wreckage, or remnant core, of a once larger cluster of stars that is now spiraling towards Sgr A* at the galactic center.

This theory also explains the existence of other massive stars around the galactic center. It is thought that these stars were stripped from the cluster due to the gravitational environment around our galaxy's central supermassive black hole.

The Gemini data for this work were obtained by a team led by Francois Rigaut (Gemini Observatory) as part of an adaptive optics demonstration run in July 2000. The results are published in Astronomy and Astrophysics, Volume 423, pgs 155-167 (2004)