Today, at 03.10, local time, a giant balloon was launched from Esrange, the Aerospace Operation Facility of the Swedish Space Corporation. The balloon is carrying BLAST, a large sub-millimetre telescope for studies of star formation. Never before has such a huge balloon been launched from Europe with such a heavy instrument. High altitude winds will carry the telescope from Sweden to a landing near the border between Canada and Alaska.

For several years scientists from different university and institutes from the USA, Canada, United Kingdom and Mexico have been preparing this large telescope. The campaign is sponsored by NASA. The operation will be supported by The National Scientific Balloon Facility (NSBF) in cooperation with the Swedish Space Corporation (SSC) balloon team at Esrange. 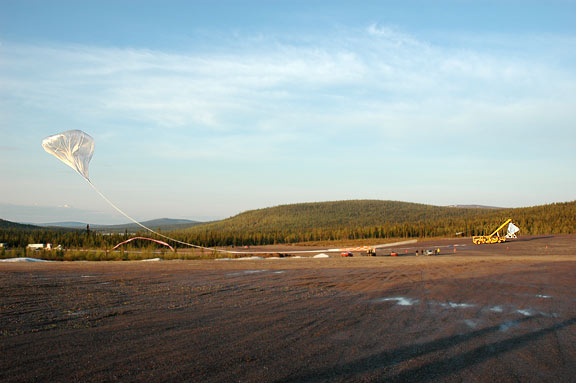 The Principal Investigator of BLAST, Prof. Mark Devlin, University of Pennsylvania, says "BLAST will address some of the most important cosmological and galactic questions regarding the formation and evolution of stars, galaxies and clusters. It makes use of bolometric arrays to achieve highly sensitivity images at three sub-millimetre wavelengths, while at the same time testing technology used in the future ESA sub-millimetre space telescope Herschel to be launched in 2007."

"A launch of a balloon of this size is extremely complicated", says Dr. Olle Norberg, Head of Esrange. "We have been working hard, investing both time and money to reach the point where we are today so this campaign is a milestone for us. We are also deeply impressed by our American colleagues from NASA and its National Scientific Balloon Facility, Dr. Norberg says.

"We are very grateful for the wonderful facilities at Esrange and all the hard work our Swedish colleagues have put into this project, says Danny RJ Ball, NSBF Site Manager. Ball said that NASA has plans to return to Esrange next year to launch 2-3 experiments under development. 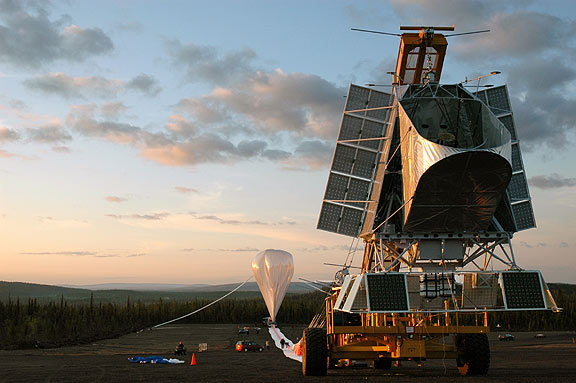 There are many advantages in launching scientific balloons from Esrange. First, the geographic location allows measurements in total sun light due to the midnight sun. If total darkness is required, instruments are launched during the winter time during polar night. Esrange has a large launch pad the size of 40 soccer fields and several well equipped buildings for preparation of the experiments. Esrange provides scientists with long-duration flights and safe landings on land, due to well known winds in the stratosphere that allows for safe flight trajectories and a landing site in North America.

Performing scientific measurements with balloon-borne instruments has some advantages when compared to satellites. The development time is considerably shorter for a balloon borne experiment and the costs are much lower. This means that balloon projects are also very suitable for Ph.D. students and an important tool to train future scientists.

The Swedish Space Corporation is a complete space industry. We develop, launch and operate space systems as well as perform tests of new aerospace systems.