Conspicuous trains of debris in valleys, arcs of debris on steep slopes and other features far from the polar ice caps bear striking similarities to glacial landscapes of Earth, says Brown University's James Head III. When combined with the latest climate models and orbital calculation for Mars, the geological features make a compelling case for Mars having ongoing climate shifts that allow ice to leave the poles and accumulate at lower latitudes.

"The exciting thing is a real convergence of these things," said Head, who presented the latest Mars climate discoveries on Sunday, 16 October, at the Annual Meeting of the Geological Society of America in Salt Lake City.

"For decades people have been saying that deposits at mid and equatorial latitudes look like they are ice-created," said Head. But without better images, elevation data and some way of explaining it, ice outside of Mars' polar regions was a hard sell.

For instance, consider what Head calls "lineated valley fill." These are lines of debris on valley floors that run downhill and parallel to the valley walls, as if they mark some sort of past flow. The same sorts of lines of debris are seen in aerial images of Earth glaciers. The difference is that on Mars the water ice sublimes away (goes directly from solid ice to gas, without any liquid phase between) and leaves the debris lines intact. On Earth the lines of debris are usually washed away as a glacier melts.

"There's so much topography and the debris is so thick (on Mars) that it's possible some of the ice might still be there," said Head. The evidence for present day ice includes unusually degraded recent impact craters in these areas - just what you'd expect to see if a lot of the material ejected from the impact was ice that quickly sublimed away.

Another peculiarly glacier-like feature seen in Martian mid-latitudes are concentric arcs of debris breaking away from steep mountain alcoves - just as they do at the heads of glaciers on Earth.

As for how ice could reach Mars lower latitudes, orbital calculations indicate that Mars may slowly wobble on its spin axis far more than Earth does (the Moon minimizes Earth's wobble). This means that as Mars' axis tilted to the extremes - up to 60 degrees from the plane of Mars' orbit - the Martian poles get a whole lot more sunshine in the summertime than they do now. That extra sun would likely sublime water from the polar ice caps, explains Head.

"When you do that you are mobilizing a lot of ice and redistributing it to the equator," Head said. "The climate models are saying it's possible."

It's pure chance that we happen to be exploring Mars when its axis is at a lesser, more Earth-like tilt. This has led to the false impression of Mars being a place that's geologically and climatically dead. In fact, says Head, Mars is turning out to be a place that is constantly changing. Lineated Valley Fill at the Dichotomy Boundary on Mars: Evidence for Regional Mid-Latitude Glaciation View abstract: http://gsa.confex.com/gsa/2005AM/finalprogram/abstract_94125.htm

During the Geological Society of America Annual Meeting, 16-19 October, contact Ann Cairns at the GSA Newsroom, Salt Palace Convention Center, for assistance and to arrange for interviews: +1-801-534-4770. 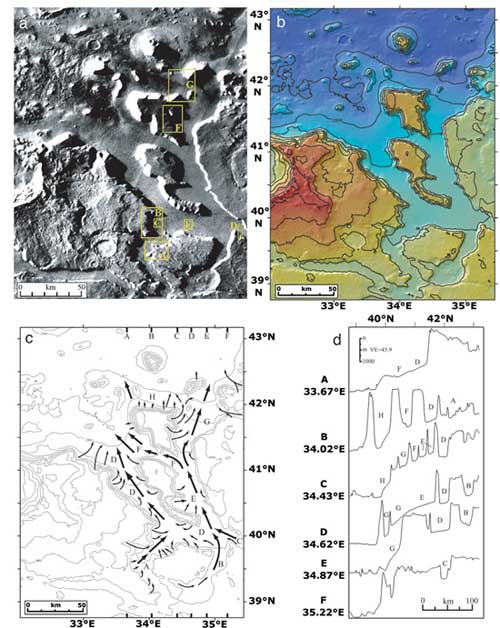