Saturn's moon Enceladus – an active, icy world with an unusually warm south pole – may have performed an unusual trick for a planetary body.  New research shows Enceladus rolled over, literally, explaining why the moon's hottest spot is at the south pole.

"The mystery we set out to explain was how the hot spot could end up at the pole if it didn't start there," said Francis Nimmo, assistant professor of Earth sciences, University of California, Santa Cruz.

The researchers propose the reorientation of the moon was driven by warm, low-density material rising to the surface from within Enceladus. A similar process may have happened on Uranus' moon Miranda, they said. Their findings are in this week's journal Nature.

"It's astounding that Cassini found a region of current geological activity on an icy moon that we would expect to be frigidly cold, especially down at this moon's equivalent of Antarctica," said Robert Pappalardo, co-author and planetary scientist at NASA's Jet Propulsion Laboratory in Pasadena, Calif.  "We think the moon rolled over to put a deeply seated warm, active area there."   Pappalardo worked on the study while at the University of Colorado.

Rotating bodies, including planets and moons, are stable if more of their mass is close to the equator. "Any redistribution of mass within the object can cause instability with respect to the axis of rotation. A reorientation will tend to position excess mass at the equator and areas of low density at the poles," Nimmo said.  This is precisely what happened to Enceladus.

Nimmo and Pappalardo calculated the effects of a low-density blob beneath the surface of Enceladus and showed it could cause the moon to roll over by up to 30-degrees and put the blob at the pole. 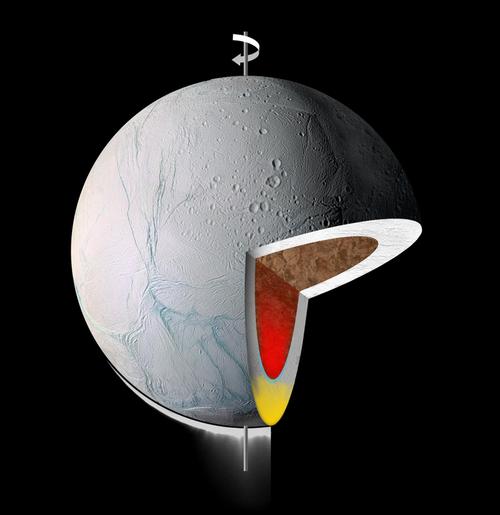 Image: This graphic illustrates the interior of Saturn's moon Enceladus. It shows warm, low-density material rising to the surface from within, in its icy shell (yellow) and/or its rocky core (red). A NASA-funded study says Enceladus might have rolled or rotated itself to place this area of low density at the south pole. This finding is in the June 1, 2006, issue of the journal Nature. This graphic uses parts of visible-light images taken by the Cassini spacecraft camera that have been modified for the purpose of showing the interior structure. Cassini's cameras captured a giant plume blasting icy particles into space. Full-Res: PIA08500

Pappalardo used an analogy to explain the Enceladus rollover.  "A spinning bowling ball will tend to roll over to put its holes -- the axis with the least mass -- vertically along the spin axis.  Similarly, Enceladus apparently rolled over to place the portion of the moon with the least mass along its vertical spin axis," he said.

The rising blob (called a "diapir") may be within either the icy shell or the underlying rocky core of Enceladus. In either case, as the material heats up it expands and becomes less dense, then rises toward the surface. This rising of warm, low-density material could also help explain the high heat and striking surface features, including the geysers and "tiger-stripe" region suggesting fault lines caused by tectonic stress.

Internal heating of Enceladus probably results from its eccentric orbit around Saturn.  "Enceladus gets squeezed and stretched by tidal forces as it orbits Saturn, and that mechanical energy is transformed into heat energy in the moon's interior," added Nimmo.

Future Cassini observations of Enceladus may support this model.  Meanwhile, scientists await the next Enceladus flyby in 2008 for more clues.

This research was supported by grants from NASA. The Cassini-Huygens mission is a cooperative project of NASA, the European Space Agency and the Italian Space Agency. JPL, a division of Caltech, manages the mission for NASA's Science Mission Directorate. The Cassini orbiter was designed, developed and assembled at JPL.

For images and information about the Cassini mission, visit: http://www.nasa.gov/cassini and http://saturn.jpl.nasa.gov .