Located on the Florida coast, just south of NASA's launch site for all Apollo moon missions and Space Shuttle flights , SLC-40 is a world class heavy lift launch facility, capable of supporting both the Falcon 9 and future Falcon 9 Heavy missions. In operation since 1965, SLC-40 has hosted numerous launches, including the departure of two interplanetary missions; the Mars Observer satellite, and the Cassini spacecraft now exploring the rings and moons of the planet Saturn.

"Initiating activities at the Cape in Florida is a major milestone in our mission to decrease the cost of reliable access to space," said Elon Musk, founder and CEO of SpaceX, at the ceremony.

"This is truly the beginning of a new era in commercial space in Florida and we are thrilled to help bring SpaceX to Florida" commented Space Florida CEO Steve Kohler, who also participated in the ceremony.

In the coming months, SpaceX will perform extensive upgrades and removal of outdated infrastructure to transform the site into a state of the art facility for commercial satellite launches, supply missions to the International Space Station (ISS), and eventually lofting crew carrying missions to the ISS and future orbiting destinations. 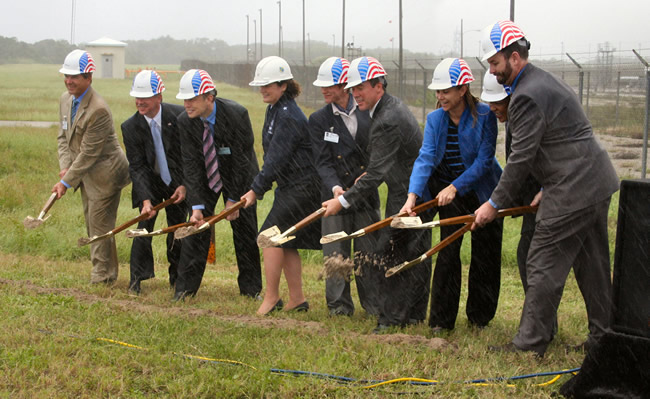 In May 2006, the Florida Legislature passed the Space Florida Act, consolidating Florida's three existing space entities into a single new organization. Space Florida was formed to be the single point of contact for state aerospace-related activities with federal agencies, the military, State agencies, universities, and the private sector, consolidating the roles and responsibilities of three predecessor organizations. Space Florida was created to strengthen Florida's position as the global leader in aerospace research, investment, exploration and commerce. As Florida's aerospace development organization, Space Florida is committed to attracting and expanding the next generation of space industry businesses. With its highly trained workforce, proven infrastructure and unparalleled record of achievement, Florida is the ideal location for aerospace businesses to thrive - and Space Florida is the perfect partner to help them succeed. For more information please visit http://www.spaceflorida.gov.

Started in 2002 by Elon Musk, founder of PayPay, Space Exploration Technologies (SpaceX) is developing a family of launch vehicles intended to reduce the cost and increase the reliability of both manned and unmanned space transportation ultimately by a factor of ten or more. With its Falcon line of launch vehicles, SpaceX is able to offer light, medium and heavy lift capabilities to deliver spacecraft into any inclination and altitude, from low Earth orbit to geosynchronous orbit to planetary missions.

As part of NASA's Commercial Orbital Transportation Services (COTS) competition, SpaceX will launch a Falcon 9 with a cargo carrying Dragon spacecraft on a series of three demonstration missions from Cape Canaveral to the International Space Station, culminating with the delivery of supplies to the $100 billion dollar orbiting laboratory. SpaceX intends to demonstrate its launch, maneuvering, berthing and return abilities by 2009 - a year before NASA has scheduled the conclusion of Space Shuttle operations. For more information visit http://www.SpaceX.com.