During the week of May 5-9, 2008, a key step on the path to Space-Based Solar Power was achieved: a "first-of-a-kind" long-range demonstration of solar-powered wireless power transmission using a solid-state phased array transmitter located on the U.S. island of Maui (on Haleakala) and receivers located on the island of Hawai'i (Mauna Loa) and airborne.

The demonstration, achieved by Managed Energy Technologies LLC of the U.S. and sponsored by Discovery Communications, Inc., involved the transmission of RF energy over a distance of up to 148 kilometers (about 90 miles): almost 100-times further than a major 1970s power transmission performed by NASA in the Mojave Desert in California.

The 2008 project (which lasted only 5 months and cost less than $1M) proved that real progress toward Space Solar Power can be made quickly, affordably and internationally, including key participants from the U.S. and Japan. 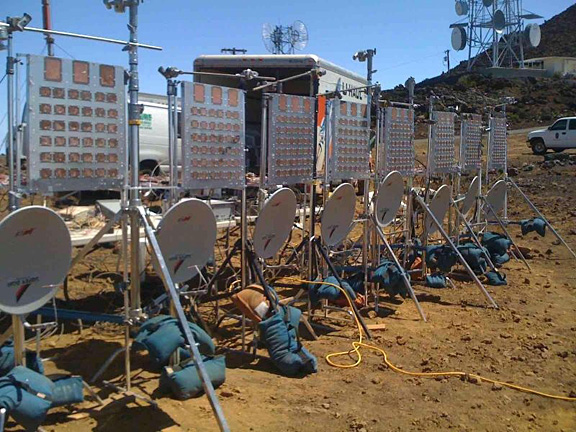 A number of key technologies were integrated and tested together for the first time in this project, including solar power modules, solid-state FET amplifiers, and a novel "retrodirective" phase control system. In addition, the project developed the first ever "field-deployable" system-developing new information regarding the prospective economics of space solar power / wireless power transmission systems.

"This milestone demonstrates that Space-Based Solar Power deserves further study as one important answer to America's future energy needs," said Mark Hopkins, Senior Vice President of the National Space Society. "This kind of demonstration is critical to the incremental development of breakthrough technologies."

The project's leader was former NASA executive and physicist John C. Mankins (Chief Operating Officer of Managed Energy Technologies LLC, and President of the Space Power Association). Key participants included Professor Nobuyuki Kaya of Kobe University in Japan and Frank Little of Texas A&M University in the U.S. (both world leaders in WPT technology), and Dr. Neville I. Marzwell of the California Institute of Technology. Students at the two universities were largely responsible for fabrication of the hardware for this first-of-a-kind experiment.

The National Space Society (NSS) is an independent, grassroots organization dedicated to the creation of a spacefaring civilization. Founded in 1974, NSS is widely acknowledged as the preeminent citizen's voice on space. NSS counts thousands of members and more than 50 chapters in the United States and around the world. The society also publishes Ad Astra magazine, an award-winning periodical chronicling the most important developments in space. For more information about NSS, visit www.nss.org.