With energy costs continually on the rise and taking its toll on the world population and the environment, the need for energy conservation has never been greater. It is estimated that 40% of our energy is used controlling the temperature in buildings. Of this, over 30% escapes from the building primarily through the conventionally insulated walls metal or wood studs in a process termed Thermal Bridging.

Taking the newly discovered Aerogel insulation technology developed by NASA, which is the highest insulating material in existence, Thermablok(TM) developed an amazing product that may soon become a requirement in the building industry. Aerogel, also referred to as "frozen smoke," has been difficult to adapt to most uses because of its fragility. The patented Thermablok material however overcomes this by using a unique fiber to suspend a proprietary formula of Aerogel such that it can be bent or compressed while still retaining its amazing insulation properties.

Now available to the building industry, just one 1/4" x 1-1/2" (6.25mm x 38mm) strip of Thermablok(TM) added to each stud in a wall before drywall, breaks the "thermal bridging" and can increase the thermal insulation factor of a wall by over 40%!

While sounding too good to be true, for something so simple to produce such incredible results, the figures are substantiated by the U.S. Department of Energy's Oak Ridge Laboratory and J.M. Laboratory. They compared two identical (metal stud/drywall) walls; one with one strip of the material on each 2x4 stud edge (one side only) and the second wall without the material. The results were amazing. A 1/4" of the material increased the insulation factor by 30% and 3/8" increased the insulation factor by an amazing 42%.

Thermablok(TM) was developed by the international acoustical research company Acoustiblok(R). Mark Nothstine, head of Research and Development at Acoustiblok stated, "Thermal transmission is greater through solid objects, and of course, the least through air or a vacuum. Thus, in a regular wood or metal stud wall, the area that continues to conduct thermally are the studs which mechanically connect one side of a wall to the other. On an infrared thermal test of a wall, the studs show up very clearly as the points of conductivity. Thermal bridging is the prime energy loss in a building. As the Thermablok(TM) Aerogel material is 95% air, and is between the stud and the drywall, it breaks the mechanical connection (thermal bridging) exceptionally well." 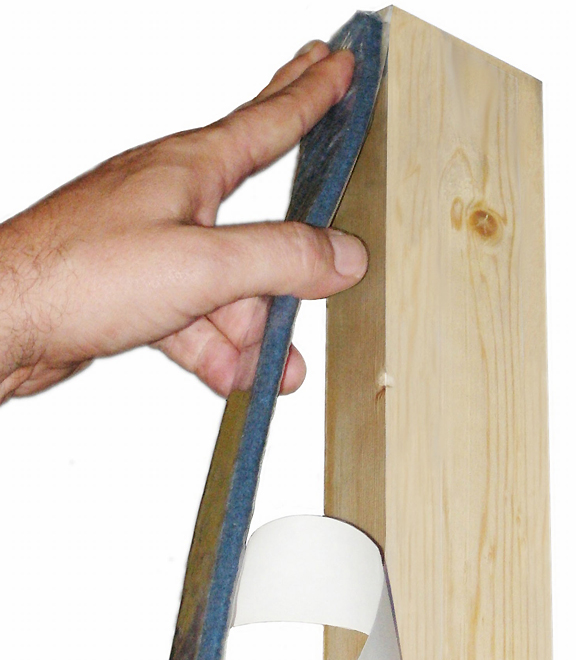 NASA has been developing Aerogel insulation technology for several years, using it on the space shuttle, space suits, and for many other advanced insulation requirements, including the last Mars mission. This technology has the potential to revolutionize energy conservation. As recently reported on the "Science Channel," Aerogel will be the breakthrough in building energy conserving buildings. Nothstine also stated, "The thermal increases achieved with Thermablok will provide continuing energy cost and environmental savings. As an example; a Midwest residential home, 2,400 sqft with 16" on center stud framing, R13 insulation and wood siding should result in a $746 per year in energy cost savings with a reduction of 3.9 tons of CO2 emissions. Add to this the many tax deductions offered by the government and you should recover your entire cost in the first year."

C.E.O. & Founder of Acoustiblok, Lahnie Johnson, who has worked in the Aerospace industry is very enthusiastic about their new product, which is an extension of the company's already environmentally friendly product, Acoustiblok. Johnson takes pride in developing products that are not only environmentally friendly, but also energy conserving. He said, "The applications of this product are endless. It solves major energy conservation issues in conventional construction as well as increasing privacy through increased acoustic performance. Considering that over 50% of energy in the U.S. is used within buildings (not transportation), Thermablok(TM) has the capability to drastically alter our expectations on energy conservation and CO2 emissions."

Johnson believes in conserving energy versus producing more. Stating, "Real energy conservation is far better and less expensive than producing more for that which is wasted. Thermablok's technology couldn't have come at a better time."

-- Very significant saving in energy costs
-- 100% recyclable
-- Contains no ozone depleting substances
-- Uses >30% recycled content
-- Composite material consisting of over 95% air
-- Hydrophobic, unaffected by moisture, mold or water
-- Easily applied via stick-on-back
-- "Class A" fire rated
-- Economical
-- Virtually no weight means low cost (& low emissions) shipping
-- Adds acoustical isolation
-- Not affected by age as it does not react with moisture of the atmosphere
-- Made in USA