Processes that laid the foundation for life on Earth -- star and planet formation and the production of complex organic molecules in interstellar space -- are yielding their secrets to astronomers armed with powerful new research tools, and even better tools soon will be available. Astronomers described three important developments at a symposium on the "Cosmic Cradle of Life" at the annual meeting of the American Association for the Advancement of Science in Chicago, IL. Chemistry Cycle

In one development, a team of astrochemists released a major new resource for seeking complex interstellar molecules that are the precursors to life. The chemical data released by Anthony Remijan of the National Radio Astronomy Observatory (NRAO) and his university colleagues is part of the Prebiotic Interstellar Molecule Survey, or PRIMOS, a project studying a star-forming region near the center of our Milky Way Galaxy.

PRIMOS is an effort of the National Science Foundation's Center for Chemistry of the Universe, started at the University of Virginia (UVa) in October 2008, and led by UVa Professor Brooks H. Pate. The data, produced by the NSF's Robert C. Byrd Green Bank Telescope (GBT) in West Virginia, came from more than 45 individual observations totalling more than nine GigaBytes of data and over 1.4 million individual frequency channels.

Scientists can search the GBT data for specific radio frequencies, called spectral lines -- telltale "fingerprints" -- naturally emitted by molecules in interstellar space. "We've identified more than 720 spectral lines in this collection, and about 240 of those are from unknown molecules," Remijan said. He added, "We're making available to all scientists the best collection of data below 50 GHz ever produced for the study of interstellar chemistry," Remijan said.

Astronomers have already identified more than 150 molecules in interstellar space in the past 40 years, including complex organic compounds such as sugars and alcohols. "This is a major change in how we search for molecules in space," Remijan explained. "Before, people decided beforehand which molecules they were looking for, then searched in a very narrow band of radio frequencies emitted by those molecules. In this GBT survey, we've observed a wide range of frequencies, collected the data and immediately made it publicly available. Scientists anywhere can 'mine' this resource to find new molecules," he said.

Another key development, presented by Crystal Brogan of the NRAO, showed that highly-detailed images of "protoclusters" of massive young stars reveal a complex mix of stars in different stages of formation, complicated gas motions, and numerous chemical clues to the physical conditions in such stellar nurseries. "We saw a much more complex picture than we had expected and now have new questions to answer," she said. 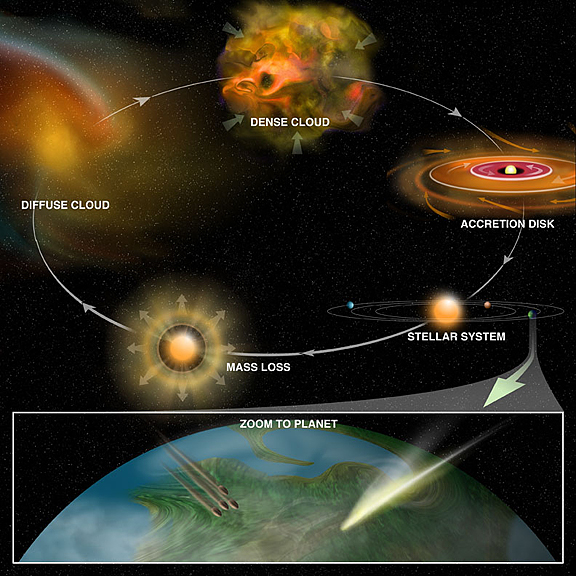 Using the Smithsonian Astrophysical Observatory's Submillimeter Array (SMA) in Hawaii, Brogan and her colleagues studied a nebula 5,500 light-years from Earth in the constellation Scorpius where stars significantly more massive than our Sun are forming. "It's essential to understand what's going on in systems like this because most stars, Sun-like stars included, form in clusters," Brogan said.

"The most massive stars in the cluster have a tremendous impact on the formation and environment of the rest of the cluster, including the less-massive stars and their planets," Brogan said, adding that "if we want to understand how solar systems that could support life form and evolve, we need to know how these giant stars affect their environment."

Also, Brogan said, the massive young stars are surrounded by "hot cores" that include copious organic material that later may be spewed into interstellar space by stellar winds and other processes. This can help "seed" star-forming regions with some of the chemicals found by the GBT and other telescopes.

Narrowing in on the problem of how planets form around young stars, David Wilner of the Harvard-Smithsonian Center for Astrophysics presented observations with the SMA that revealed new details of solar systems in the earliest stages of their formation. Wilner and his colleagues studied nine dusty disks surrounding young stars in a region in the constellation Ophiuchus.

"These are the most detailed images of such disks made at these wavelengths," Wilner said. The images show the distribution of material on the same size scale as our own Solar System, and indicate that these disks are capable of producing planetary systems. Two of the disks show large central cavities where young planets may already have swept out the material from their neighborhoods.

All three areas of study are poised for major advances with the impending arrival of powerful new radio-telescope facilities such as the Atacama Large Millimeter/submillimeter Array (ALMA) and the Expanded Very Large Array (EVLA), and new capabilities for the GBT.

Studies of protoplanetary disks and young solar systems will benefit greatly from the groundbreaking new capabilities of ALMA, Wilner said. "While we've been able to study a few of these objects so far, ALMA will be able to give us highly-detailed images of many more that we can't study today," he said. Wilner added that ALMA also will likely provide new information on the chemicals in those still-forming planetary systems.

The complex motions and chemistry of Brogan's protoclusters of young, massive stars, also will become much clearer with ALMA. "Both the detail of the images and the ability to find molecular spectral lines will improve by a factor of at least 25 with ALMA," she said. In addition, the increased power of the EVLA will give astronomers a far better look into the inner regions of the disks around young stars -- regions obscured to telescopes operating at shorter wavelengths.

"We know that complex chemicals exist in interstellar space before stars and planets form. With the new research tools coming in the next few years, we're on the verge of learning how the chemistry of the interstellar clouds, the young stars and their environments, and the disks from which planets are formed is all linked together to provide the chemical basis for life on those planets," Remijan explained.

Astrophysicist Neil deGrasse Tyson of the American Museum of Natural History noted, "Like no other science, astrophysics cross-pollinates the expertise of chemists, biologists, geologists and physicists, all to discover the past, present, and future of the cosmos -- and our humble place within it."