In images made possible only as Saturn nears equinox, NASA's Cassini spacecraft has uncovered for the first time towering vertical structures in the planet's otherwise flat rings that are attributable to the gravitational effects of a small nearby moon.

The new findings are presented in a paper authored by Cassini imaging scientists and published today online in the Astronomical Journal.

The search for ring material extending well above and below Saturn's ring plane has been a major goal of the imaging team during Cassini's "Equinox Mission," the two-year period containing exact equinox -- that moment when the sun is seen directly overhead at noon at the planet's equator. This novel illumination geometry, which occurs every half-Saturn-year, or about 15 Earth years, lowers the sun's angle to the ring plane and causes out-of-plane structures to cast long shadows across the rings' broad expanse, making them easy to detect.

In recent weeks, Cassini's cameras have spotted not only the predictable shadows of some of Saturn's moons, but also the shadows of newly revealed vertical structures in the rings themselves. And these observations have lent dramatic support to the analysis presented in today's publication that demonstrates how small moons in very narrow gaps can have considerable and complex effects on the edges of their gaps, and that such moons can be smaller than previously believed.

The 8-kilometer-wide (5-mile) moon Daphnis orbits within the 42-kilometer-wide (26-mile) Keeler Gap in Saturn's outer A ring, and its gravitational pull perturbs the orbits of the particles forming the gap's edges. The eccentricity, or the elliptical deviation from a circular path, of Daphnis' orbit can bring it very close to the gap edges. There, its gravity causes larger effects on ring particles than when it is not so close. Previous Cassini images have shown that as a consequence, the moon's effects can be time-variable and lead to the waves caused by Daphnis to change in shape with time and with distance from the moon. 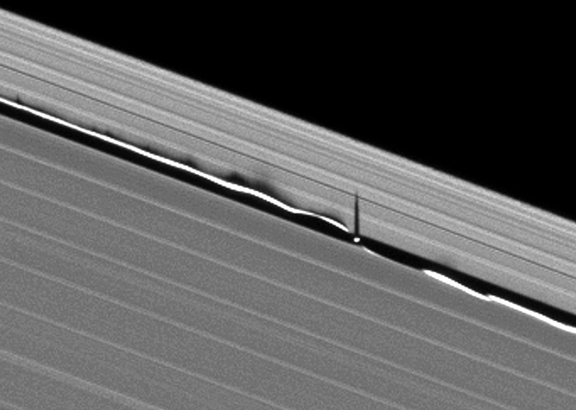 However, the new analysis also illustrates that when such a moon has an orbit inclined to the ring plane, as does Daphnis, the time-variable edge waves also have a vertical component to them. This result is backed by spectacular new images taken recently near equinox showing the shadows of the vertical waves created by Daphnis, and cast onto the nearby ring, that match the characteristics predicted by the new research.

Scientists have estimated, from the lengths of the shadows, wave heights that reach enormous distances above Saturn's ring plane -- as large as 1.5 kilometers (1 mile) -- making these waves twice as high as previously known vertical ring structures, and as much as 150 times as high as the rings are thick. The main rings -- named A, B and C -- are only about 10 meters (30 feet) thick.

"We thought that this vertical structure was pretty neat when we first saw it in our simulations," said John Weiss, the paper's lead author and a research associate of Cassini imaging team leader Carolyn Porco, another co-author on the paper, in Boulder, Colo. "But it's a million times cooler to have your theory supported by such gorgeous images. It makes you suspect you might be doing something right."

Also presented in the paper published today is a refinement to a theory used since the Voyager missions of the 1980s to infer the mass of gap-embedded moons based on how much the moons affect the surrounding ring material. The authors conclude that an embedded moon in a very narrow gap can have a smaller mass than that inferred by earlier techniques.

One of the prime future goals of the imaging team is to scour the remaining gaps and divisions within the rings to search for the moons expected to be there.

"It is one of those questions that have been nagging us since getting into orbit: 'Why haven't we yet seen a moon in every gap?'" said Porco. "We now think they may actually be there, only a lot smaller than we expected."

Images showing the shadows cast by the vertical waves on the edges of the Keeler gap can be found at http://ciclops.org, http://saturn.jpl.nasa.gov and http://www.nasa.gov/cassini .

The Cassini-Huygens mission is a cooperative project of NASA, the European Space Agency and the Italian Space Agency. The Jet Propulsion Laboratory (JPL), a division of the California Institute of Technology in Pasadena, manages the Cassini-Huygens mission for NASA's Science Mission Directorate, Washington. The Cassini orbiter and its two onboard cameras were designed, developed and assembled at JPL. The imaging team consists of scientists from the U.S., England, France, and Germany. The imaging operations center and team leader (Dr. C. Porco) are based at the Space Science Institute in Boulder, Colo.