"We expect to launch in one to three months after completing full vehicle integration," said Brian Mosdell, Director of Florida Launch Operations for SpaceX. "Our primary objective is a successful first launch and we are taking whatever time necessary to work through the data to our satisfaction before moving forward."

Though designed from the beginning to transport crew, SpaceX's Falcon 9 launch vehicle and Dragon spacecraft will initially be used to transport cargo. Falcon 9 and Dragon were selected by NASA to resupply the International Space Station (ISS) once Shuttle retires. The $1.6B contract represents 12 flights for a minimum of 20 tons to and from the ISS with the first demonstration flights beginning in 2010.

SpaceX is developing a family of launch vehicles and spacecraft intended to increase the reliability and reduce the cost of both manned and unmanned space transportation, ultimately by a factor of ten. With the Falcon 1 and Falcon 9 vehicles, SpaceX offers highly reliable/cost-efficient launch capabilities for spacecraft insertion into any orbital altitude and inclination. Starting in 2010, SpaceX's Dragon spacecraft will provide Earth-to-LEO transport of pressurized and unpressurized cargo, including resupply to the International Space Station.

Founded in 2002, SpaceX is a private company owned by management and employees, with minority investments from Founders Fund and Draper Fisher Jurvetson. The SpaceX team now numbers nearly 900, with corporate headquarters in Hawthorne, California. For more information, please visit the company's web site at www.spacex.com. 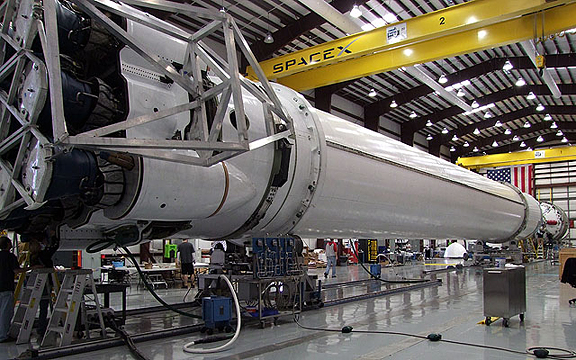 Photo caption: The Falcon 9 vehicle undergoes final integration in the hangar at the SpaceX launch site in Cape Canaveral, Florida. The vehicle's nine Merlin 1C engines are at far left, and second stage is at far right. 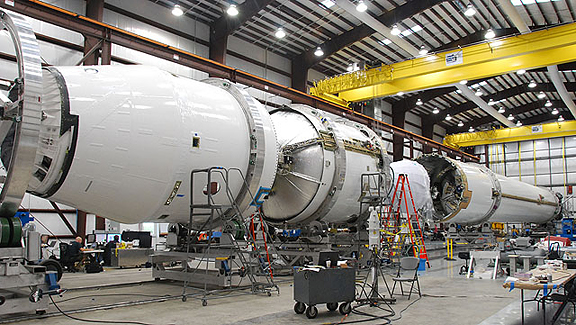