IMAGE: Scanning electron micrograph of the nanofossil Chiasmolithus from about 60 million years ago. This genus arose after the Cretacious Paleogene boundary mass extinction. The size about 8 microns.

An asteroid strike may not only account for the demise of ocean and land life 65 million years ago, but the fireball's path and the resulting dust, darkness and toxic metal contamination may explain the geographic unevenness of extinctions and recovery, according to Penn State geoscientists.

"Our results shed light on the causes of nannoplankton extinction, how productivity was restored, the factors that controlled the origination of new species, and, ultimately, how phytoplankton influenced restoration of the entire marine ecosystem," the researchers report in this month's issue of Nature Geoscience.

The researchers, using 823 samples from 17 drilling sites in both the Northern and Southern Hemispheres, analyzed the community structure of calcareous -- shelled -- nannoplankton. Included in their study were two sites -- one in the Pacific and one in the South Atlantic -- with reliable, accurate dating.

"At the Cretaceous-Paleogene boundary, 93 percent of the nannoplankton went extinct," said Timothy J. Bralower, head and professor of geosciences. "Nannoplankton are the base of the food chain in the ocean. If they go extinct, other, larger organisms that feed on them have problems."

Scientists have collected large amounts of data on nannoplankton from this time period, but, according to Bralower, each sampling was looked at separately, and no one compiled the separate sampling results. Bralower, working with Shijun Jiang, postdoctoral fellow now at Florida State University and Mark E. Patzkowsky, associate professor of geosciences; Lee R. Kump, professor of geosciences, and Jonathan D. Schueth, graduate student in geosciences, all of Penn State, found that extinction level correlates with latitude. The highest rate of extinctions is in the Northern Hemisphere with decreasing extinction levels in the Southern Hemisphere.

Analysis of the signature of the asteroid that initiated the extinction event shows that the asteroid came into our atmosphere in the southeast and traveled toward the northwest ultimately colliding with Earth on the tip of the Yucatan Peninsula in Mexico. 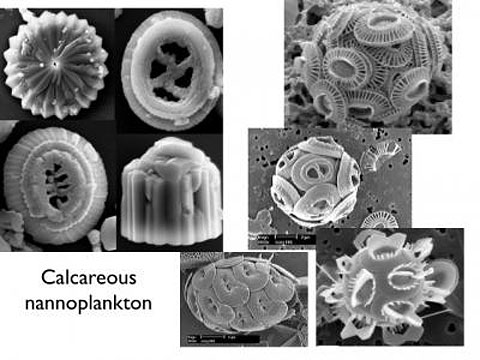 Caption: This compilation of scanning electron microscope images of organisms includes, at left, Paleocene nannofossils from 60-55 million years ago. These fossils are all post Cretacious Paleogene boundary. At right are several living nannoplankton species. Most of the objects in this compilation are also about 8 microns. Credit: Timothy Bralower; Penn State

"This agrees with the fact that North American land plants were hammered and there was an especially sever mass extinction on that continent," said Bralower.

The darkness caused by the collision would impair photosynthesis and reduce nannoplankton reproduction. While full darkness did not occur, the effects in the north would have lasted for up to six months. However, with ample sunlight and large amounts of nutrients in the oceans, the populations should have bounced back, even in the North, but they did not. The researchers suggest that toxic metals that where part of the asteroid, heavily contaminated the Northern oceans and were the major factor inhibiting recovery.

"Metal loading is a great potential mechanism to delay recovery," said Bralower. "Toxic levels in the parts per billions of copper, nickel, cadmium and iron could have inhibited recovery."

On the one hand, the researchers considered an impact scenario causing perpetual winter and ocean acidification to explain the slow recovery, but neither explains the lag between Southern and Northern Hemispheres. Trace metal poisoning, on the other hand, would have been severe near the impact in the Northern Hemisphere. When the high temperature debris from the impact hit the water, copper, chromium, aluminum, mercury and lead would have dissolved into the seawater at likely lethal levels for plankton. Iron, zinc and manganese -- normally micronutrients -- would reach harmful levels shortly after the impact. Other metal sources might be acid-rain leached soils or the effects of wildfires. Metals like these can inhibit reproduction or shell formation.

The toxic metals probably exceeded the ability of organic compounds to bind them and remove them from the system. Because nannoplankton are the base of the food chain, larger organisms concentrate any metals found in nannoplankton making the metal poisoning more effective. With the toxic metals remaining in the oceans and the lack of sunlight, the length of time for recovery might increase.

"We still do not really know why some things die out, while others hang on by a shoestring and eventually recover," said Bralower.