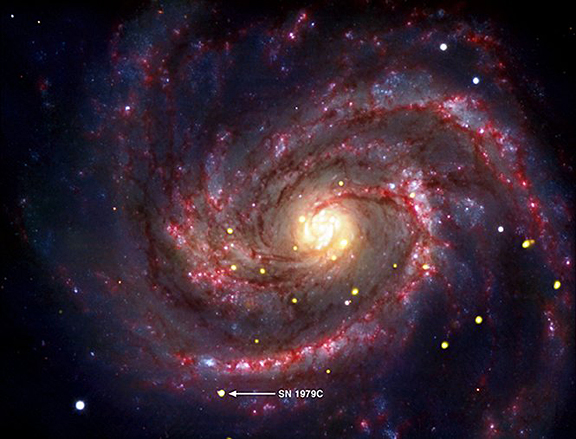 Astronomers using NASA's Chandra X-ray Observatory have found evidence of the youngest black hole known to exist in our cosmic neighborhood. The 30-year-old black hole provides a unique opportunity to watch this type of object develop from infancy.

The black hole could help scientists better understand how massive stars explode, which ones leave behind black holes or neutron stars, and the number of black holes in our galaxy and others.

The 30-year-old object is a remnant of SN 1979C, a supernova in the galaxy M100 approximately 50 million light years from Earth. Data from Chandra, NASA's Swift satellite, the European Space Agency's XMM-Newton and the German ROSAT observatory revealed a bright source of X-rays that has remained steady during observation from 1995 to 2007. This suggests the object is a black hole being fed either by material falling into it from the supernova or a binary companion.

"If our interpretation is correct, this is the nearest example where the birth of a black hole has been observed," said Daniel Patnaude of the Harvard-Smithsonian Center for Astrophysics in Cambridge, Mass. who led the study.

The scientists think SN 1979C, first discovered by an amateur astronomer in 1979, formed when a star about 20 times more massive than the sun collapsed. Many new black holes in the distant universe previously have been detected in the form of gamma-ray bursts (GRBs).

However, SN 1979C is different because it is much closer and belongs to a class of supernovas unlikely to be associated with a GRB. Theory predicts most black holes in the universe should form when the core of a star collapses and a GRB is not produced.

"This may be the first time the common way of making a black hole has been observed," said co-author Abraham Loeb, also of the Harvard-Smithsonian Center for Astrophysics. "However, it is very difficult to detect this type of black hole birth because decades of X-ray observations are needed to make the case."

The idea of a black hole with an observed age of only about 30 years is consistent with recent theoretical work. In 2005, a theory was presented that the bright optical light of this supernova was powered by a jet from a black hole that was unable to penetrate the hydrogen envelope of the star to form a GRB. The results seen in the observations of SN 1979C fit this theory very well.

Although the evidence points to a newly formed black hole in SN 1979C, another intriguing possibility is that a young, rapidly spinning neutron star with a powerful wind of high energy particles could be responsible for the X-ray emission. This would make the object in SN 1979C the youngest and brightest example of such a "pulsar wind nebula" and the youngest known neutron star. The Crab pulsar, the best-known example of a bright pulsar wind nebula, is about 950 years old.

"It's very rewarding to see how the commitment of some of the most advanced telescopes in space, like Chandra, can help complete the story," said Jon Morse, head of the Astrophysics Division at NASA's Science Mission Directorate.

The results will appear in the New Astronomy journal in a paper by Patnaude, Loeb, and Christine Jones of the Harvard-Smithsonian Center for Astrophysics. NASA's Marshall Space Flight Center in Huntsville, Ala., manages the Chandra program for the agency's Science Mission Directorate in Washington. The Smithsonian Astrophysical Observatory controls Chandra's science and flight operations from Cambridge.