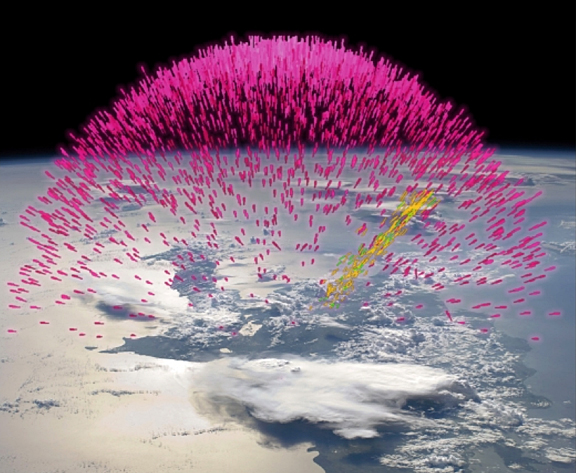 Scientists using NASA's Fermi Gamma-ray Space Telescope have detected beams of antimatter produced above thunderstorms on Earth, a phenomenon never seen before. Scientists think the antimatter particles were formed in a terrestrial gamma-ray flash (TGF), a brief burst produced inside thunderstorms and shown to be associated with lightning. It is estimated that about 500 TGFs occur daily worldwide, but most go undetected.

"These signals are the first direct evidence that thunderstorms make antimatter particle beams," said Michael Briggs, a member of Fermi's Gamma-ray Burst Monitor (GBM) team at the University of Alabama in Huntsville (UAH). He presented the findings Monday, during a news briefing at the American Astronomical Society meeting in Seattle.

Fermi is designed to monitor gamma rays, the highest energy form of light. When antimatter striking Fermi collides with a particle of normal matter, both particles immediately are annihilated and transformed into gamma rays. The GBM has detected gamma rays with energies of 511,000 electron volts, a signal indicating an electron has met its antimatter counterpart, a positron.

Although Fermi's GBM is designed to observe high-energy events in the universe, it's also providing valuable insights into this strange phenomenon. The GBM constantly monitors the entire celestial sky above and the Earth below. The GBM team has identified 130 TGFs since Fermi's launch in 2008.

"In orbit for less than three years, the Fermi mission has proven to be an amazing tool to probe the universe. Now we learn that it can discover mysteries much, much closer to home," said Ilana Harrus, Fermi program scientist at NASA Headquarters in Washington.

The spacecraft was located immediately above a thunderstorm for most of the observed TGFs, but in four cases, storms were far from Fermi. In addition, lightning-generated radio signals detected by a global monitoring network indicated the only lightning at the time was hundreds or more miles away. During one TGF, which occurred on Dec. 14, 2009, Fermi was located over Egypt. But the active storm was in Zambia, some 2,800 miles to the south. The distant storm was below Fermi's horizon, so any gamma rays it produced could not have been detected.

"Even though Fermi couldn't see the storm, the spacecraft nevertheless was magnetically connected to it," said Joseph Dwyer at the Florida Institute of Technology in Melbourne, Fla. "The TGF produced high-speed electrons and positrons, which then rode up Earth's magnetic field to strike the spacecraft." 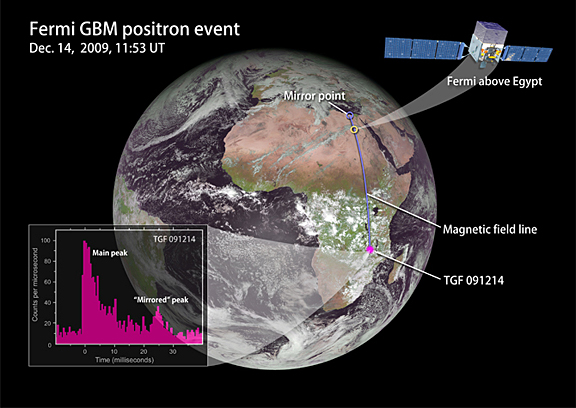 The beam continued past Fermi, reached a location, known as a mirror point, where its motion was reversed, and then hit the spacecraft a second time just 23 milliseconds later. Each time, positrons in the beam collided with electrons in the spacecraft. The particles annihilated each other, emitting gamma rays detected by Fermi's GBM.

Scientists long have suspected TGFs arise from the strong electric fields near the tops of thunderstorms. Under the right conditions, they say, the field becomes strong enough that it drives an upward avalanche of electrons. Reaching speeds nearly as fast as light, the high-energy electrons give off gamma rays when they're deflected by air molecules. Normally, these gamma rays are detected as a TGF.

But the cascading electrons produce so many gamma rays that they blast electrons and positrons clear out of the atmosphere. This happens when the gamma-ray energy transforms into a pair of particles: an electron and a positron. It's these particles that reach Fermi's orbit.

The detection of positrons shows many high-energy particles are being ejected from the atmosphere. In fact, scientists now think that all TGFs emit electron/positron beams. A paper on the findings has been accepted for publication in Geophysical Research Letters.

"The Fermi results put us a step closer to understanding how TGFs work," said Steven Cummer at Duke University. "We still have to figure out what is special about these storms and the precise role lightning plays in the process."

NASA's Fermi Gamma-ray Space Telescope is an astrophysics and particle physics partnership. It is managed by NASA's Goddard Space Flight Center in Greenbelt, Md. It was developed in collaboration with the U.S. Department of Energy, with important contributions from academic institutions and partners in France, Germany, Italy, Japan, Sweden and the United States.

The GBM Instrument Operations Center is located at the National Space Science Technology Center in Huntsville, Ala. The team includes a collaboration of scientists from UAH, NASA's Marshall Space Flight Center in Huntsville, the Max Planck Institute for Extraterrestrial Physics in Germany and other institutions.