Based on the Most Reliable Propulsion Systems in the World, the Liberty(TM) can Achieve a First Flight by 2013 and Close the U.S. Human Space Flight Gap.

ATK (NYSE: ATK) and Astrium (an EADS Company) are working together in response to NASA's Commercial Crew Development-2 (CCDev-2) procurement. The team is offering NASA launch services with the Liberty(TM) rocket. This new launch vehicle combines two of the world's most reliable propulsion systems, with a collective heritage of nearly 150 successful flights. 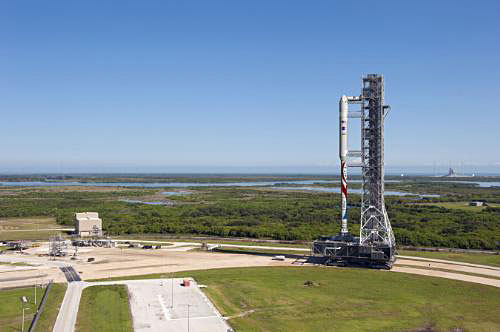 Astrium, the developer and manufacturer of the Ariane 5 launcher, working with Snecma (Safran Group), Europe's leading propulsion company, is providing Liberty's second stage based on the liquid-fueled cryogenic core of the Ariane 5 vehicle powered by the Vulcain2 engine. The Ariane 5 Launcher, operated by Arianespace, has flown more than 40 consecutive successful missions over nearly eight years and has launched more commercial satellites than any other launch vehicle in the world during that time. The Ariane 5 enjoys the lowest launch insurance rates in the industry due to an unrivaled safety record in the commercial launch services market.

"This team represents the true sense of international partnership in that we looked across borders to find the best for our customers," said Blake Larson, President of ATK Aerospace Systems Group. "Together we combine unique flight-proven systems and commercial experience that allows us to offer the market's most capable launch vehicle along with flexibility to meet a wide variety of emerging needs. Liberty provides greater performance at less cost than any other comparable launch vehicle." Liberty would be a two stage launcher able to deliver 44,500 pounds to the International Space Station orbit, which would give it a launch capability to carry any crew vehicle in development. Both stages were designed for human-rating since inception and would enable unmatched crew safety. Since Liberty uses qualified, proven, and reliable systems, the team has planned an initial flight by the end of 2013, a second test flight in 2014, and operational capability in 2015.

"The Liberty initiative provides tremendous value because it builds on European Ariane 5 launcher heritage, while allowing NASA to leverage the mature first stage," said Charlie Precourt, Vice President and General Manager of ATK Space Launch Systems. "We will provide unmatched payload performance at a fraction of the cost, and we will launch it from the Kennedy Space Center using facilities that have already been built. This approach allows NASA to utilize the investments that have already been made in our nation's ground infrastructure and propulsion systems for the Space Exploration Program." 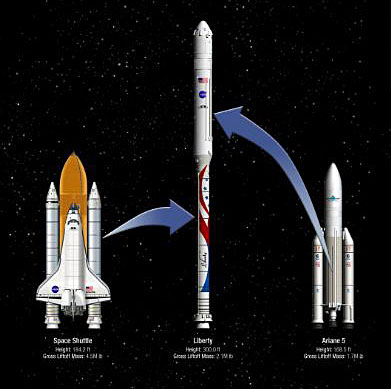 The advantages of the Liberty launch system are extensive. It is built on a solid foundation of human-rated launch technology, and leverages billions of dollars of investments by NASA and NATO-allied European Governments in the frame of the European Space Agency. This international effort--which embodies the spirit of global cooperation articulated in the recent National Space Policy--will afford NASA a readily available, cost-effective solution for human spaceflight. Finally, NASA is already extremely familiar with the Ariane and ATK launch systems, both of which have played historic roles in directly supporting NASA's mission.

The five-segment first stage design is based on more than 30 years of safety-driven improvements on the space shuttle program. The result is a higher performing, more reliable solid rocket motor, which equates to increased safety for crew and mission success for cargo. Besides adding a fifth segment, ATK also enhanced the propellant grain, provided a larger nozzle opening, and upgraded the liner and insulation -- all designed to meet performance requirements and increase reliability while significantly lowering manufacturing costs.

About ATK - ATK is an aerospace, defense, and commercial products company with operations in 24 states, Puerto Rico, and internationally, and revenues of approximately $4.8 billion. News and information can be found on the Internet at www.atk.com.

About Astrium - Astrium, a wholly owned subsidiary of EADS, is dedicated to providing civil and defence space systems and services. In 2009, Astrium had a turnover of euro 4.8 billion and more than 15,000 employees in France, Germany, the United Kingdom, Spain and the Netherlands. Its three main areas of activity are Astrium Space Transportation for launchers and orbital infrastructure, Astrium Satellites for spacecraft and ground segment, and Astrium Services for comprehensive end-to-end value-added solutions covering secure and commercial satcoms and networks, high security satellite communications equipment, bespoke geo-information and navigation services worldwide.

EADS is a global leader in aerospace, defence and related services. In 2009, the Group - comprising Airbus, Astrium, Cassidian and Eurocopter - generated revenues of euro 42.8 billion and employed a workforce of more than 119,000. EADS operates in the United States through EADS North America. News and information can be found on the Internet at www.astrium.eads.net

About Snecma (Safran Group): Snecma (Safran Group) is one of the world's leading manufacturers of aircraft and space engines, with a wide range of propulsion systems on offer. The company designs and builds commercial aircraft engines - including the CFM56 world's leader - and military aircraft engines, together with a complete range of engine maintenance repair and overhaul (MRO) services. Snecma develops and produces propulsion systems and equipment for launch vehicles and satellites. In this field, Snecma brings together 40 partners across twelve of the European Space Agency's member states, to produce Ariane's Vulcain, Vulcain2 and HM7B engines. www.snecma.com

About Ariane 5: The Ariane 5 Launcher in the frame of ESA (European Space Agency) programs, is developed and manufactured by Astrium and operated by Arianespace. Arianespace is the world's leading launch Service & Solutions company, providing innovation to its customers since 1980. Backed by 21 shareholders and the European Space Agency, Arianespace offers an unrivalled family of launchers, comprising Ariane 5, Soyuz and Vega, and an international workforce renowned for a culture of commitment and excellence. As of January 31, 2011, Arianespace has launched with Ariane launchers a total of 289 payloads, including more than half of all the commercial satellites now in service worldwide. It has a backlog of 21 Ariane 5 and 18 Soyuz launches, equal to more than three years of business.