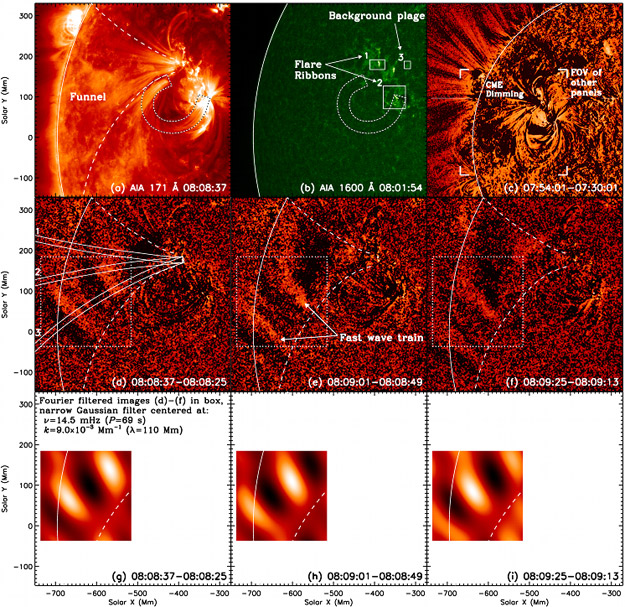 Scientists using the Atmospheric Imaging Assembly (AIA) instrument on board NASA's Solar Dynamics Observatory (SDO), have detected quasi-periodic waves in the low solar corona that travel at speeds as high as 2,000 kilometers per second (4.5 million miles per hour). These observations provide, for the first time, unambiguous evidence of propagating fast mode magnetosonic waves at such high speeds in the Sun's low atmosphere. Dr. Wei Liu, a Stanford University Research Associate at the Lockheed Martin Solar and Astrophysics Laboratory (LMSAL) at the company's Advanced Technology Center (ATC) in Palo Alto, presented the findings today at the annual meeting of the Solar Physics Division of the American Astronomical Society, in Las Cruces, N.M. A paper detailing the discovery has been accepted for publication in The Astrophysical Journal Letters.

It is well known that the hot plasma in the solar corona oscillates and produces propagating waves when "kicked" by a flare or eruption, similar to ripples in water produced by dropping a rock into a still pond. Theories and computer models predicted the existence of slow and fast moving waves, and the former were clearly seen by solar observatories in space. However, clues for fast moving waves were seen only briefly in the past during a solar eclipse on the ground, because previous space telescopes could not take pictures rapidly enough to image these fast waves.

"It is the high temporal and spatial resolution of AIA that enables us to see these waves clearly for the first time. AIA takes high sensitivity, extreme ultraviolet (EUV) pictures of the solar corona at spatial scales down to 1,100 kilometers, every 12 seconds with 0.1-2 second exposures," said Dr. Liu, who led the analysis of the waves. "In addition, AIA's full Sun field of view at seven simultaneous wavelengths allows us to track them over large spatial and temperature ranges."

The waves are typically successive, arc-shaped fronts of intensity variations, similar to water ripples, which emanate near a flare kernel in the wake of a coronal mass ejection and propagate along a funnel of coronal loops. They have velocities of 1,000-2,000 kilometers per second, periods in the 30-200 seconds range, and wavelengths of 100,000-200,000 kilometers that is equivalent to stacking eight to sixteen Earths atop one another.

"Their characteristic spatial and temporal scales and dispersion relation agree with theoretical expectations of fast mode magnetosonic waves, and are reproduced in our high fidelity 3D computer simulations," said Prof. Leon Ofman of the Catholic University of America, part of the team that made the discovery.

"They seem to be a common phenomenon. During the first year of the SDO mission, despite the Sun being relatively quiet, we have seen about a dozen such waves," said Dr. Karel Schrijver, principal physicist of LMSAL. "Although their exact trigger mechanism is currently under investigation, they appear to be intimately related to flares that sometimes exhibit pulsations at similar frequencies."

Waves such as these are believed to be responsible for many fundamental, yet enigmatic processes on the Sun, such as heating the corona to millions of degrees, accelerating the solar wind, triggering remote eruptions, and delivering energy and information between different parts of the atmosphere. Knowledge of these waves obtained directly from observations is key to understanding the physics of such processes and thus their profound consequences on near-Earth space and the terrestrial environment.

"This discovery and analysis is very significant because we are witnessing phenomena of which we were previously unaware. In light of this discovery, the more we look at solar flares, the more of these waves we see, and as observation and analysis lead to insight, the better we will understand the processes involved," said Dr. Alan Title, AIA Principal Investigator at LMSAL who first noticed the fast propagating waves in routine AIA movies. "The findings announced today are an example of the fruit of a two decade long collaboration, of which we are enormously proud, between Lockheed Martin and Stanford University."

SDO is the first mission and flagship of NASA's Living with a Star (LWS) program launched near the onset of the new solar cycle on February 11, 2010. The goal of LWS is "to improve our understanding of how and why the Sun varies, how the Earth and solar system respond, and how the variability and response affects humanity in space and on Earth."

SDO carries three state-of-the-art instruments: the AIA observing the tenuous solar corona permeated with magnetic fields, the Helioseismic Magnetic Imager (HMI) observing the surface Doppler velocity and magnetic field, and the Extreme UV Variability Experiment (EVE) recording the spatially integrated EUV spectrum of the Sun as a star. According to the LWS program scientist, Dr. Lika Guhathakurta of NASA headquarters, "SDO is our 'Hubble for the Sun'. It promises to transform solar physics in the same way the Hubble Space Telescope has transformed astronomy and cosmology."

The Solar and Astrophysics Laboratory at the ATC conducts basic research into understanding and predicting space weather and the behavior of our Sun including its impacts on Earth and climate. It has a 47-year-long heritage of spaceborne solar instruments including the Soft X-ray Telescope on the Japanese Yohkoh satellite, the Michelson Doppler Imager on the ESA/NASA Solar and Heliospheric Observatory, the solar telescope on NASA's Transition Region and Coronal Explorer, the Focal Plane Package on the Japanese Hinode satellite, the Solar X-ray Imagers on GOES-N, -O and -P, the Extreme Ultraviolet Imager instruments on NASA's twin STEREO spacecraft, and the Helioseismic and Magnetic Imager and the Atmospheric Imaging Assembly on NASA's Solar Dynamics Observatory. The ATC is currently building both the science instrument and spacecraft for NASA's Interface Region Imaging Spectrograph (IRIS), a Small Explorer Mission scheduled for launch in late 2012.