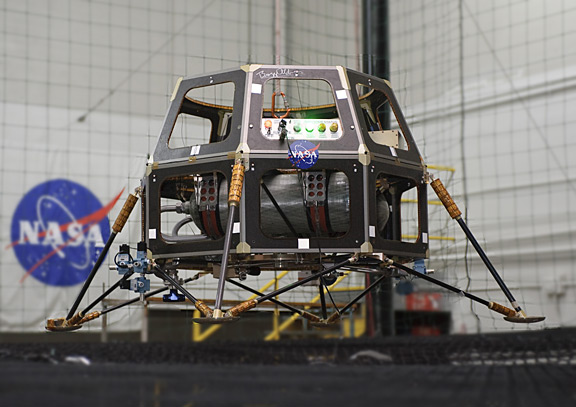 [Larger image] Moon Express, Inc. today announced a successful flight test of a prototype lunar lander system being developed in partnership with NASA. Controlled flight tests of the Lander Test Vehicle (LTV) allow Moon Express to assess lunar vehicle design, including guidance, navigation and control software and new landing leg concepts designed by Moon Express engineers. The company signed a Reimbursable Space Act Agreement with NASA last year to invest over $500K into the commercialization of technology developed by the agency. The flight test marks an important milestone in the collaborative agreement, demonstrating that innovative public-private partnerships can be utilized to establish new capabilities of mutual benefit to commercial space companies and NASA.

Moon Express plans to send a series of robotic spacecraft to the Moon for ongoing exploration and commercial development focused on benefits to Earth. "I believe in the long term economic potential of the Moon to produce resources essential to Earth's energy future," said Naveen Jain, Co-Founder and Chairman of Moon Express. "The recent discovery of abundant water on the Moon is the key we needed to economically liberate valuable lunar resources such as Helium-3 and platinum group metals to improve life here on Earth."

Dr. Barney Pell, Co-Founder, CTO and Vice Chairman of Moon Express, believes that exploration and development of lunar resources is one of the most important activities for humanity's future. "The Moon has never been explored before from an entrepreneurial perspective," he said. "I believe the Moon may be the greatest wealth creation opportunity in history. It's not a question of if; just of who and when."

The company views NASA's partnership as exemplary of a commitment to help nurture the burgeoning commercial spacecraft industry. Dr. Robert (Bob) Richards, Moon Express CEO, stated that White House policies supporting NASA's openness to commercial partnerships combined with Silicon Valley culture has been a winning combination for the company. "Locating Moon Express in the NASA Research Park puts us at the crossroads of the future," Richards said. "Silicon Valley has embraced commercial space and Moon Express is benefitted greatly by our proximity to the NASA Ames Research Center."