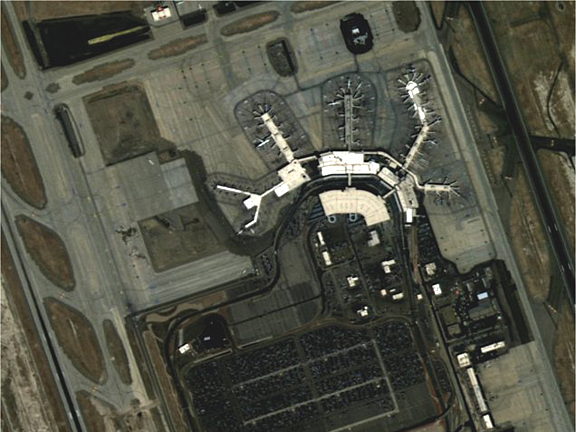 The first high resolution satellite imagery is today released from NigeriaSat-2, as engineers from the Nigerian space agency (NASRDA) and the satellite's manufacturer Surrey Satellite Technology Ltd (SSTL) continue in the successful commissioning of the new satellite from NASRDA's headquarters in Abuja. Testing of all the systems on-board the satellite has been successfully completed, and calibration of the imaging payloads is ongoing with outstanding results already being produced.

In the full resolution terminal buildings extract, aircraft can be seen at the stands as well as cars in the parking lot. In the runways extract painted numbers can clearly be read on the tarmac and there is sufficient detail to count the engines on larger aircraft. In another extract of a highway interchange, vehicles are readily discernable on the road.

NigeriaSat-2 is the first SSTL 300kg class satellite, and represents a significant step forward for NASRDA from its 100kg predecessor, NigeriaSat-1. The main reason for its increased size is that imaging at 2.5m resolution demands a larger camera - but the increased capability doesn't end there. The distinctive heptagonal SSTL-300 platform is highly agile enabling it to roll off-centre to acquire images in a variety of modes to suit the application and the response times required and the data handling and power system are also significantly enhanced to provide greater throughput as well as quality of imagery.

During disasters, NigeriaSat-2 will complement its fellow Disaster Monitoring Constellation satellites by using its high resolution imager to "zoom in" on areas of interest and determine if individual buildings are damaged, bridges destroyed or roads impassable. It is also the first satellite in the African Resource Management (ARM) constellation.

Nigeria's national space agency (NASRDA) also plans to harness the satellite's new capabilities and fast image downloading to map the entire country in detail every four months. The high resolution and geo-location accuracy of the satellite make it possible to monitor urban development in sprawling cities such as Lagos, and for planning infrastructure such as roads. Geospatial data will also be used to update the land registry with accurate and current information.

There are also benefits for commercial imaging campaigns. NigeriaSat-2's smaller pixel size improves the accuracy of the maps used for applications such as precision agriculture. In this case more granular data improves fertiliser application maps, meaning that fertiliser can be applied more efficiently.

At next week's International Astronautical Congress in Cape Town, NASRDA and SSTL will present a selection of impressive high resolution images from NigeriaSat-2 collected in these early stages of the mission.

Since 1981 SSTL has built and launched 36 satellites - as well as providing training and development programmes, consultancy services, and mission studies for ESA, NASA , international governments and commercial customers, with its innovative approach that is changing the economics of space.

Based in Guildford, UK, SSTL is owned by EADS Astrium NV.
www.sstl.co.uk

Notes to editor:
Images are available from http://www.sstl.co.uk/media-gallery/images

High resolution images are available for media us from the press contacts below.

This press release can be downloaded as a Word or Pdf document at the following url: http://www.sstl.co.uk/news-and-events