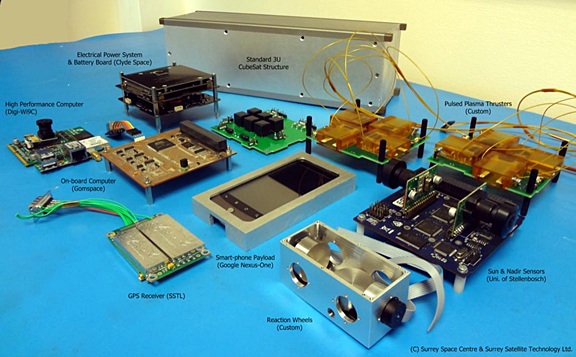 Space technology experts from Surrey Satellite Technology (SSTL) and the Surrey Space Centre (SSC) have announced the four lucky winners of the 'Space App Competition' who will see their Android Applications run on smartphone-powered satellite STRaND-1, due for launch into space next year.

Applying through a competition held on Facebook, the four winners were chosen for their app's scientific benefits, their creativity, or the app's ability to get young people enthusiastic about science and technology. The winning apps make use of the technology of the Android smartphone, including the microphone, speakers, camera, and display, in conjunction with the satellite's conventional features - enabling STRaND-1 to do things in space that no one has done before.

Testing the theory 'in space no one can hear you scream' - made popular in the 1979 film 'Alien' - the 'Scream in Space!' application will make full use of the smartphone's speakers. Developed by student-run society Cambridge University Spaceflight, 'Scream in Space!' will allow the public to upload videos of themselves screaming in a creative way to an allocated website. The most popular videos will be played on the phone when the satellite is in orbit, and the scream recorded using the smartphone's microphone.

'Postcards from space' & '360' are joint winners, using an app that will take images using the smartphone's camera and use the technology available on the satellite to establish the satellite's position. The public will be able to request their own unique satellite image of Earth through a website, where images also can be seen on a map showing where they have been acquired.

Using the phone and satellite magnetometers, the truly scientific 'iTesa' app will be able to record the magnitude of the magnetic field about the phone during orbit. Used as a precursor to further scientific studies, such as detecting Alfven waves (magnetic oscillations in our upper atmosphere), the iTesa app could provide proof of principle, and explores the possibility of using a mobile phone for scientific use in space. 'The STRaND Data' app will show satellite telemetry on the smartphone's display which can be imaged by an additional camera on-board. This app is developed by the team behind FUNcube (UK Amateur Radio Educational Satellite) and will not only enable new graphical telemetry to interpret trends but also provide a lasting way of communicating with the smart-phone.

STRaND-1 System Engineer Shaun Kenyon commented: "After some tough judging, we've chosen the four winning Apps and are really excited about what they will do in space. The Apps make full use of the phone, meaning that we'll see some pretty cool stuff that hasn't been done before".

Dr Chris Bridges, based at Surrey Space Centre (SSC) at the University of Surrey, added: "We'd like to congratulate the winners and thank all contestants for sending through such amazing ideas. We were very impressed by the response to the competition and wish that we could include them all".
To find out more about the progress of the STRaND-1 mission, follow @SurreyNanosats on Twitter. Or visit the STRaND Facebook page.