Evidence for Subsurface Lake on Europa 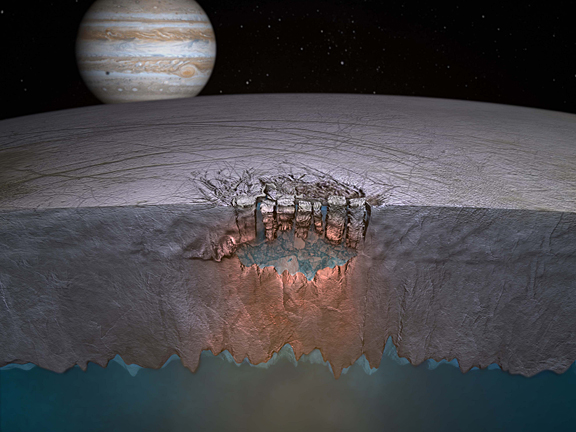 In a finding of significance in the search for life beyond Earth, scientists have discovered what appears to be a body of liquid water the volume of the North American Great Lakes locked inside the icy shell of Jupiter's moon Europa - which could represent a new potential habitat for life.

Many more such lakes exist throughout the shallow regions of Europa's shell, the researchers predict in an online article in the journal Nature. Further increasing the potential for life, many of these lakes are covered by floating ice shelves that seem to be collapsing, providing a mechanism for transferring nutrients and energy between the surface and a vast ocean already thought to exist below the thick ice shell.

"The potential for exchange of material between the surface and subsurface is a big key for astrobiology," says Wes Patterson, a planetary scientist at the Johns Hopkins University Applied Physics Laboratory in Laurel, Md., and a co-author of the study. "Europa's subsurface harbors much of what we believe is necessary for life but chemical nutrients found at the surface are likely vital for driving biology."

"One opinion in the scientific community has been, 'If the ice shell is thick, that's bad for biology - that it might mean the surface isn't communicating with the underlying ocean," adds Britney Schmidt, the paper's lead author and a postdoctoral fellow at The University of Texas at Austin's Institute for Geophysics. "Now we see evidence that it's a thick ice shell that can mix vigorously, and new evidence for giant shallow lakes. That could make Europa and its ocean more habitable."

The scientists focused on Galileo spacecraft images of two roughly circular, bumpy features on Europa's surface called chaos terrains. Based on similar processes seen here on Earth -- on ice shelves and under glaciers overlaying volcanoes -- they developed a four-step model to explain how the features form on Europa. It resolves several conflicting observations, some of which seemed to suggest that the ice shell is thick and others that it is thin.

While one of the chaos terrains appears to be fully formed, the other might still be forming - an indication that Europa's surface is still geologically active. "For quite some time, Europa geologists have been struggling figure out what these features are and how they form," says APL's Louise Prockter, a senior planetary scientist who has conducted numerous studies of Europa. "This is the first time that anyone has come up with an end-to-end model that explains what we see on the surface."

The scientists have good reason to believe their model is correct, based on observations of Europa from the Galileo spacecraft and of Earth. Still, because the inferred lakes are several kilometers below the surface, the only true confirmation of their presence would come from a future spacecraft mission designed to probe the ice shell. Such a mission was rated as one of the highest priority flagship missions by the National Research Council's recent Planetary Science Decadal Survey and is currently being studied by NASA.

"If we're ever to send a landed mission to Europa, these areas would be great places to study," Prockter says.

The paper, "Active formation of 'chaos terrain' over shallow subsurface water on Europa," will appear as an advance online publication of Nature on Nov. 16. With Schmidt and Patterson, authors on the paper include Don Blankenship, senior research scientist at the Institute for Geophysics, and Paul Schenk, planetary scientist at the Lunar and Planetary Institute in Houston. The research was funded by NASA, the Institute for Geophysics at The University of Texas at Austin's Jackson School of Geosciences, and the Vetlesen Foundation.