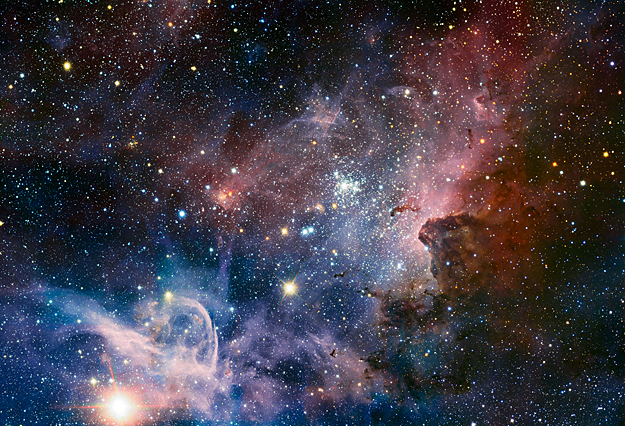 ESO's Very Large Telescope has delivered the most detailed infrared image of the Carina Nebula stellar nursery taken so far. Many previously hidden features, scattered across a spectacular celestial landscape of gas, dust and young stars, have emerged. This is one of the most dramatic images ever created by the VLT.

Deep in the heart of the southern Milky Way lies a stellar nursery called the Carina Nebula. It is about 7500 light-years from Earth in the constellation of Carina (The Keel) [1]. This cloud of glowing gas and dust is one of the closest incubators of very massive stars to the Earth and includes several of the brightest and heaviest stars known. One of them, the mysterious and highly unstable star Eta Carinae, was the second brightest star in the entire night sky for several years in the 1840s and is likely to explode as a supernova in the near future, by astronomical standards. The Carina Nebula is a perfect laboratory for astronomers studying the violent births and early lives of stars.

Although this nebula is spectacular in normal visible-light pictures (eso0905), many of its secrets are hidden behind thick clouds of dust. To penetrate this veil a European team of astronomers, led by Thomas Preibisch (University Observatory, Munich, Germany) has used the power of ESO's Very Large Telescope along with an infrared-sensitive camera called HAWK-I [2]. Hundreds of individual images have been combined to create this picture, which is the most detailed infrared mosaic of the nebula ever taken and one of the most dramatic images ever created by the VLT. It shows not just the brilliant massive stars, but hundreds of thousands of much fainter stars [3] that were previously invisible.

The dazzling star Eta Carinae itself appears at the lower left of the new picture. It is surrounded by clouds of gas that are glowing under the onslaught of fierce ultraviolet radiation. Across the image there are also many compact blobs of dark material that remain opaque even in the infrared. These are the dusty cocoons in which new stars are forming.

Over the last few million years this region of the sky has formed large numbers of stars both individually and in clusters. The bright star cluster close to the centre of the picture is called Trumpler 14. Although this object is seen well in visible light, many more fainter stars can be seen in this infrared view. And towards the left side of the image a small concentration of stars that appear yellow can be seen. This grouping was seen for the first time in this new data from the VLT: these stars cannot be seen in visible light at all. This is just one of many new objects revealed for the first time in this spectacular panorama.

[1] Carina is the keel of the mythological ship Argo, of Jason and the Argonauts fame.

[2] Dusty regions of space absorb and scatter short wavelength blue light more than the longer wavelength red. This effect also explains why sunsets on Earth are often red, particularly when the atmosphere is dusty. In some dusty parts of the sky, particularly in star formation regions such as the Carina Nebula, this effect is so strong that no visible light gets through at all. Astronomers overcome this problem by observing in infrared light using special cameras such as HAWK-I on ESO's VLT or the VISTA infrared survey telescope.

[3] One of the main goals of the astronomers was to search for stars in this region that were much fainter and less massive than the Sun. The image is also deep enough to allow the detection of young brown dwarfs.

The year 2012 marks the 50th anniversary of the founding of the European Southern Observatory (ESO). ESO is the foremost intergovernmental astronomy organisation in Europe and the world's most productive astronomical observatory. It is supported by 15 countries: Austria, Belgium, Brazil, the Czech Republic, Denmark, France, Finland, Germany, Italy, the Netherlands, Portugal, Spain, Sweden, Switzerland and the United Kingdom. ESO carries out an ambitious programme focused on the design, construction and operation of powerful ground-based observing facilities enabling astronomers to make important scientific discoveries. ESO also plays a leading role in promoting and organising cooperation in astronomical research. ESO operates three unique world-class observing sites in Chile: La Silla, Paranal and Chajnantor. At Paranal, ESO operates the Very Large Telescope, the world's most advanced visible-light astronomical observatory and two survey telescopes. VISTA works in the infrared and is the world's largest survey telescope and the VLT Survey Telescope is the largest telescope designed to exclusively survey the skies in visible light. ESO is the European partner of a revolutionary astronomical telescope ALMA, the largest astronomical project in existence. ESO is currently planning a 40-metre-class European Extremely Large optical/near-infrared Telescope, the E-ELT, which will become "the world's biggest eye on the sky".