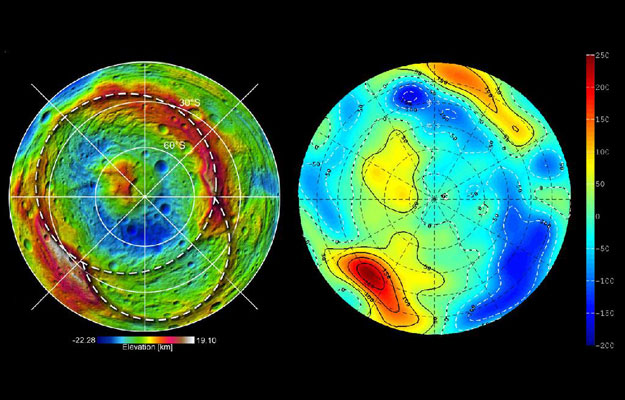 NASA Dawn mission researchers undertaking the first global analysis of the giant asteroid Vesta have looked back at the history of our solar system and found evidence of surprisingly recent collisions that left large impact basins.

Vesta's largest basin, named Rheasilvia, was determined to be approximately 1 billion years old by counting smaller craters that formed on top of it, he said.

Dating Vesta's large impact craters confirms earlier research in which scientists have studied meteorites found on Earth called the howardites, eucrites and diogenites (HEDs) that are believed to come from Vesta. Data from the Dawn mission confirms that link, and is now helping to place those meteorites in a geological context on the surface of Vesta, showing where those rocks came from and the processes that influenced their formation and evolution, O'Brien said.

"As one of the largest asteroids, Vesta is a type of Solar System body that we have not explored before. It is a transitional body between asteroids and full-sized planets. It is similar to many of the small planetesimals that were the building blocks of the planets, and at the same time has many features of a small planet itself, having melted and formed a core and crust, and having a diverse range of surface features and compositions," he said.

"Dawn data has moved Vesta from being a blurry object a few pixels across in Hubble Space Telescope images to a geologic object, and that means that we must study it as a geologic object," Yingst said. "My work has focused on creating the global geologic map for the project. This is important because geologic mapping is a comprehensive approach meant to organize our ignorance.

"In geologic mapping we correlate the data that we get from different types of datasets - images, composition and so on - and try to determine geologic units from those datasets," Yingst said. "Defining those geologic units is the first step in revealing the underlying geologic processes and placing those processes into a global framework."

New global maps and videos of Vesta are available at http://www.nasa.gov/mission_pages/dawn/news/dawn20120510.html

"Dawn's visit to Vesta has confirmed our broad theories of this giant asteroid's history, while also helping to fill in details it would have been impossible to know from afar," said Carol Raymond, deputy principal investigator based at NASA's Jet Propulsion Laboratory, Pasadena, Calif. "Dawn's residence of nearly a year has made Vesta's planet-like qualities obvious and shown us our connection to that bright orb in our night sky."

Vesta's colorful surface - visible in the infrared spectrum -- is shaped by material delivered by colliding asteroids, but also by sub-surface material ejected from deeper layers by these impacts. These deeper layers, exposed in the walls of the large impact basins like Rheasilvia, suggest that Vesta underwent some kind of melting that separated the denser and lighter materials.

This process, known as "differentiation," which occurred about 4.56 billion years ago, very close to the birth of the solar system itself, makes Vesta similar to terrestrial planets and our moon, which also are segregated into crust, mantle and core. In fact, Dawn has been able to confirm that Vesta has an iron core with a radius of about 110 kilometers, which proved that Vesta differentiated.

Dawn also reveals evidence that might support a subsurface magma ocean present early in Vesta's existence in the pattern of minerals that have been exposed by the deep gashes created by space rock impacts. Though there could still be another explanation for the pattern, a magma ocean occurs when a body undergoes almost complete melting and leads to layered building blocks for planets. Other bodies with magma oceans ended up becoming parts of Earth and other planets.

Launched in 2007, Dawn began its exploration of the giant asteroid Vesta in mid-2011. The spacecraft's next assignment will be to study the dwarf planet Ceres in 2015.

The Dawn mission to asteroid Vesta and Ceres is managed by JPL, for NASA's Science Mission Directorate, Washington, D.C. The University of California, Los Angeles is responsible for overall Dawn mission science. Dawn is a project of the directorate's Discovery Program, managed by NASA's Marshall Space Flight Center in Huntsville, Ala.

Visit http://www.nasa.gov/dawn and http://dawn.jpl.nasa.gov for more information on the Dawn mission.

Celebrating its 40th anniversary, the Planetary Science Institute is a private, nonprofit 501(c)(3) corporation dedicated to solar system exploration. It is headquartered in Tucson, Arizona, where it was founded in 1972.

PSI scientists are involved in numerous NASA and international missions, the study of Mars and other planets, the Moon, asteroids, comets, interplanetary dust, impact physics, the origin of the solar system, extra-solar planet formation, dynamics, the rise of life, and other areas of research. They conduct fieldwork in North America, Australia and Africa. They also are actively involved in science education and public outreach through school programs, children's books, popular science books and art.

PSI scientists are based in 17 states, the United Kingdom, Switzerland, Russia, Australia and Canada.