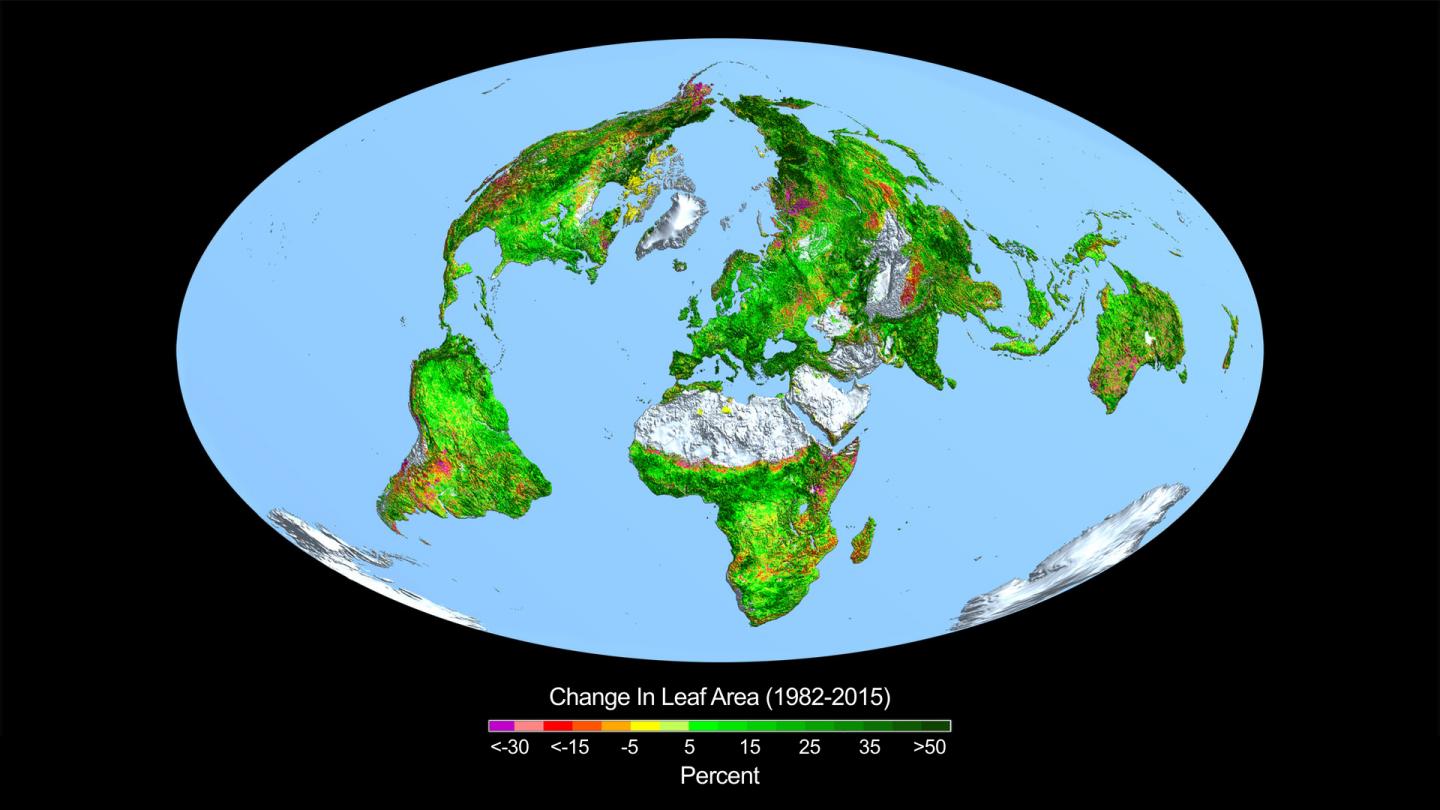 From a quarter to half of Earth's vegetated lands has shown significant greening over the last 35 years largely due to rising levels of atmospheric carbon dioxide, according to a new study published in the journal Nature Climate Change on April 25.

An international team of 32 authors from 24 institutions in eight countries led the effort, which involved using satellite data from NASA's Moderate Resolution Imaging Spectrometer and the National Oceanic and Atmospheric Administration's Advanced Very High Resolution Radiometer instruments to help determine the leaf area index, or amount of leaf cover, over the planet's vegetated regions. The greening represents an increase in leaves on plants and trees equivalent in area to two times the continental United States.

Green leaves use energy from sunlight through photosynthesis to chemically combine carbon dioxide drawn in from the air with water and nutrients tapped from the ground to produce sugars, which are the main source of food, fiber and fuel for life on Earth. Studies have shown that increased concentrations of carbon dioxide increase photosynthesis, spurring plant growth.

However, carbon dioxide fertilization isn't the only cause of increased plant growth--nitrogen, land cover change and climate change by way of global temperature, precipitation and sunlight changes all contribute to the greening effect. To determine the extent of carbon dioxide's contribution, researchers ran the data for carbon dioxide and each of the other variables in isolation through several computer models that mimic the plant growth observed in the satellite data.

Results showed that carbon dioxide fertilization explains 70 percent of the greening effect, said co-author Ranga Myneni, a professor in the Department of Earth and Environment at Boston University. "The second most important driver is nitrogen, at 9 percent. So we see what an outsized role CO2 plays in this process."

About 85 percent of Earth's ice-free lands is covered by vegetation. The area covered by all the green leaves on Earth is equal to, on average, 32 percent of Earth's total surface area - oceans, lands and permanent ice sheets combined. The extent of the greening over the past 35 years "has the ability to fundamentally change the cycling of water and carbon in the climate system," said lead author Zaichun Zhu, a researcher from Peking University, China, who did the first half of this study with Myneni as a visiting scholar at Boston University.

Every year, about half of the 10 billion tons of carbon emitted into the atmosphere from human activities remains temporarily stored, in about equal parts, in the oceans and plants. "While our study did not address the connection between greening and carbon storage in plants, other studies have reported an increasing carbon sink on land since the 1980s, which is entirely consistent with the idea of a greening Earth," said co-author Shilong Piao of the College of Urban and Environmental Sciences at Peking University.

While rising carbon dioxide concentrations in the air can be beneficial for plants, it is also the chief culprit of climate change. The gas, which traps heat in Earth's atmosphere, has been increasing since the industrial age due to the burning of oil, gas, coal and wood for energy and is continuing to reach concentrations not seen in at least 500,000 years. The impacts of climate change include global warming, rising sea levels, melting glaciers and sea ice as well as more severe weather events.

The beneficial impacts of carbon dioxide on plants may also be limited, said co-author Dr. Philippe Ciais, associate director of the Laboratory of Climate and Environmental Sciences, Gif-suv-Yvette, France. "Studies have shown that plants acclimatize, or adjust, to rising carbon dioxide concentration and the fertilization effect diminishes over time."

"While the detection of greening is based on data, the attribution to various drivers is based on models," said co-author Josep Canadell of the Oceans and Atmosphere Division in the Commonwealth Scientific and Industrial Research Organisation in Canberra, Australia. Canadell added that while the models represent the best possible simulation of Earth system components, they are continually being improved.