Operating earnings1 were $44.9 million, or $1.23 per share1, compared to $55.9 million, or $1.53 per share, for the first quarter of 2016. The decrease reflected lower operating EBITDA, as well as higher corporate expense, additional non-cash interest expense following the securitization of orbital receivables and a higher effective income tax rate on operating earnings.

Net earnings under IFRS for the first quarter of 2017 were $5.9 million, down from $40.7 million for the same period of last year. Net earnings were impacted by the inclusion and variability of certain large, non-operational items, particularly restructuring costs and incremental legal and other professional fees related to the acquisition of DigitalGlobe, Inc.

The Company has declared a quarterly dividend of $0.37 per common share payable on June 30, 2017 to shareholders of record at the close of business on June 15, 2017.

The Company continued to make substantive progress on its strategic plans to increase access to the U.S. government market. The Company received facility security clearance for the offices of SSL MDA Holdings, Inc. on February 23, 2017. 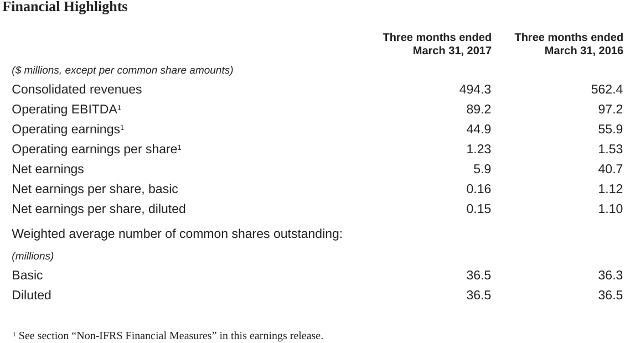 MDA’s business is focused on markets and customers with strong repeat business potential, primarily in the Communications sector and the Surveillance and Intelligence sector. In addition, the Company conducts a significant amount of advanced technology development.

MDA’s established global customer base is served by more than 4,800 employees operating from 15 locations in the United States, Canada, and internationally.

The Company’s common shares trade on the Toronto Stock Exchange under the symbol MDA.

MDA President and CEO Howard Lance and Executive Vice President and CFO Anil Wirasekara will host a Conference Call today, May 2, 2017 at 2:30 p.m. Pacific (5:30 p.m. Eastern) to discuss the financial results and to answer questions.

The Conference Call will also be Webcast live at:
http://mdacorporation.com/corporate/investor/events