UrtheCast Corp. (TSX:UR) ("UrtheCast" or the "Company") today announces financial results for the three and twelve months ended on December 31, 2017 and provides an update on its financial condition. 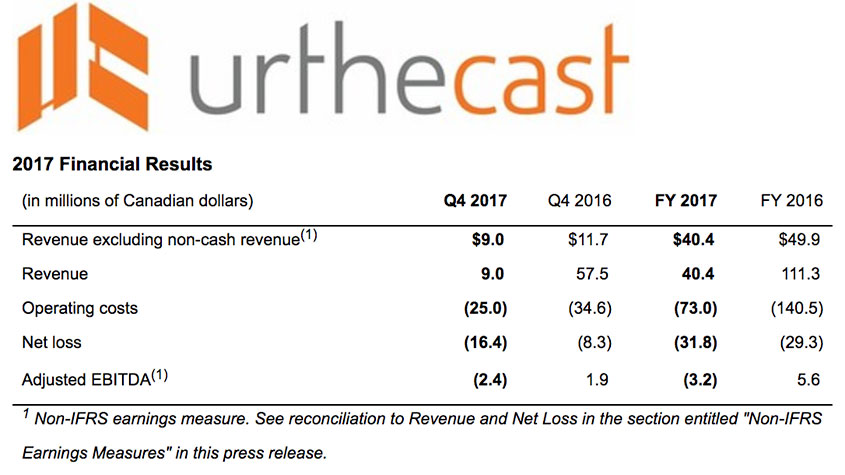 Engineering services revenue of $32.6 million in 2017, compared to $34.7 million in 2016, decreased due to a change in the expected completion date of one of our engineering services contracts, which resulted in revenue being recognized over a longer period, and also due to lower revenue being recognized on one of our contracts for the provision of space hardware, as a higher percentage of the work was completed in the prior year. Earth Observation ("EO") imagery revenue of $7.8 million in 2017, compared to $15.2 million in 2016, was significantly lower due to ongoing delay in securing a major contract award.

As at March 31, 2018, the Company had (i) less than $7.5 million in cash on hand, a decrease of $4.5 million from its previously announced cash position of $12 million as at February 28, 2018, and a decrease of $15.7 million since December 31, 2017; and (ii) $16.6 million in restricted cash. Based on the Company's forecasted cash flows for the next twelve months, the Company's current cash flow from operations may not be sufficient to cover its commitments, obligations and operating costs.  The Company will need to complete the UrtheDaily Financing described below in order to pay for its ongoing costs of operations as well as service its working capital deficiency, meet its commitments to lenders and fund the development of the UrtheDaily Constellation. There can be no assurance that any such financing will be completed on the terms described below or at all.

The Company's auditor has included an Emphasis of Matter paragraph in its independent auditor's report of the Company's audited financial statements with respect to conditions and matters that indicate the existence of a material uncertainty that may cast significant doubt about the Company's ability to continue as a going concern.

(i) Update on Senior Secured Facility

UrtheCast announced today that it has received permission from a syndicate of lenders (the "Senior Lenders") to release certain terms of the senior secured facility for the UrtheDaily project (the "UrtheDaily Senior Secured Facility"). The terms below have been negotiated by the Company and the Senior Lenders, but any transaction is subject to finalization of definitive documentation, satisfactory to both parties, which is ongoing. The loan will make available to the Company US$142 million in two equal drawdowns subject to such finalized documentation and upon satisfaction of the conditions precedent described below.

As a condition precedent for the UrtheDaily Senior Secured Facility closing, the Company must raise subordinated capital (such as in the Subordinated Capital Financing described below) of at least US$25 million. In addition, the Company will be required to effectuate the refinancing of an existing credit facility and may therefore need to raise as much as an additional $25 million of subordinated capital acceptable to the Senior Lenders. The availability of the first and second drawdowns will also be subject to the Company maintaining certain maximum leverage and total contracted value ratios, as ordinarily required of debt financing facilities of this type.

The Senior Lenders will be entitled to a royalty equal to 10% (adjusted to 5% if the UrtheDaily Senior Secured Facility is repaid within 39 months of closing) of the gross revenues generated by the UrtheDailyTM Constellation unless previously terminated by the Company.

The Company expects to be in line to close the facility over the next two weeks, although there can be no assurance that the transaction will be closed on the terms described above or on any other terms.  On closing of the transaction, a copy of the credit agreement will be filed and will be available for viewing and download on SEDAR (www.sedar.com) and readers are encouraged to review it in its entirety.

On March 9, 2018, the Company announced that the proposed UrtheDaily Senior Secured Facility included a drawdown condition that the Company receive US$45 million from subordinated capital sources.  US$20 million of this amount is still available to the Company through vendor financing.

Under the current terms of the UrtheDaily Senior Secured Facility described above, the remaining US$25 million of subordinated capital is now also a condition to closing the UrtheDaily Senior Secured Facility, and the Company will be required to refinance an existing credit facility and may therefore need to raise up to an additional US$25 million of subordinated capital acceptable to the Senior Lenders.

The Company is also in advanced negotiations with a Canadian private equity group to provide a backstop commitment that will potentially provide additional financing of up to US$25 million of subordinated capital that may be required, which commitment will be subject to completing the initial US$25 million subordinated capital financing described above. The private placement remains subject to certain conditions, including the Company entering into definitive documentation with the Senior Lenders. Pursuant to the terms of the private placement there may be restrictions on the use proceeds, where at least 50% of such proceeds are to be applied to the UrtheDaily Constellation.

In October 2017, the Company formed a Special Committee comprised of independent directors to review and respond to expressions of interest from leading industry players interested in exploring potential partnerships and transaction structures to exploit the Company's leading SAR-IP and engineering talent to capitalize on the growing interest by the US and Canadian governments in SAR technology, and to explore other strategic alternatives potentially available to the Company.

While no decision on any particular alternative has been reached at this time, the Company continues to receive interest from third parties, including in areas outside of traditional channels, such as licensing the SAR-IP to other companies, selling SAR-IP payloads for inclusion on others' satellites or deployment of the SAR-IP technology in a variety of innovative Smallsat configurations, which the Company's SAR-IP supports. There can be no assurance that this process will result in any transaction. The Company does not currently intend to disclose further developments with respect to this process, unless and until the Board of Directors approves a specific transaction or otherwise concludes its review of strategic alternatives.

Deferral of Long-Term Debt Covenant and Deferral of Principal Repayment

Due to the lower than expected revenues in 2017 in our EO business, prior to the end of the year we requested, and received, a waiver of the annual leverage ratio covenant from our lender with respect to our €25 million term loan. The lender also granted a six-month deferral of the annual €4 million principal repayment, which was due on December 11, 2017.

In the fourth quarter of 2017, due to the significant uncertainty over whether the Company would be able to monetize the ISS Cameras, either through a sale or through alternate means, management of the Company determined that the remaining carrying value of the assets should be written down to nil, resulting in an additional impairment allowance of $8.7 million being recorded in the fourth quarter of 2017 and $9.4 million in the year. 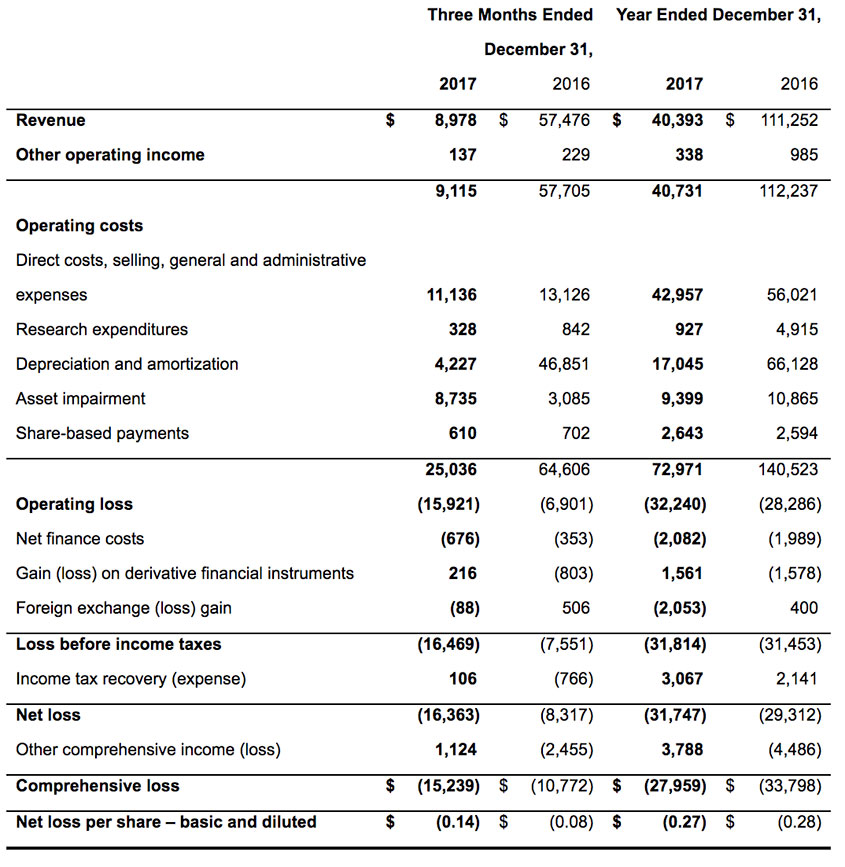 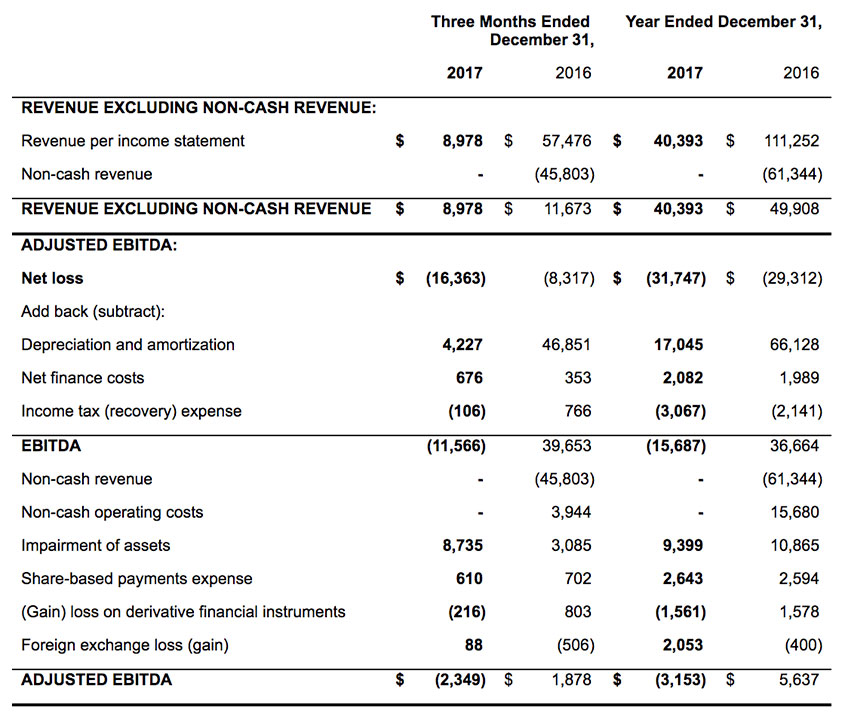 ABOUT URTHECAST CORP.
UrtheCast Corp. is a Vancouver-based technology company that serves the rapidly evolving geospatial and geoanalytics markets with a wide range of information-rich products and services. The Company operates EO sensors in space, through its subsidiary Deimos Imaging, including two satellites, Deimos-1 and Deimos-2, to produce imagery data for partners and customers in multiple markets. Through its subsidiary Deimos Imaging, UrtheCast processes and distributes imagery data and value-added products on behalf of the PanGeo Alliance, a network of seven satellite operators with a combined 13 medium and high resolution EO sensors. UrtheCast is also developing two EO satellite constellations: the world's first fully-integrated constellation of 16 multispectral optical and synthetic aperture radar ("SAR") satellites, called OptiSAR™, and a six-satellite constellation designed to capture high-quality, medium-resolution optical imagery of the Earth's landmass, excluding Antarctica, every day, called UrtheDaily™.  The Company is advancing a strategy to finance and launch the UrtheDaily™ and OptiSAR™ constellations. Common shares of UrtheCast trade on the Toronto Stock Exchange as ticker 'UR'.
For more information, visit UrtheCast's website at www.urthecast.com.
Non-IFRS Financial Measures
The Company prepares its financial statements in accordance with International Financial Reporting Standards ("IFRS"), as issued by the International Accounting Standards Board. This release includes certain non-IFRS financial measures, such as non-IFRS revenues, EBITDA and adjusted EBITDA. The Company uses these non-IFRS financial measures as supplemental indicators of its operating performance and financial position. These measures do not have any standardized meanings prescribed by IFRS and therefore are unlikely to be comparable to the calculation of similar measures used by other companies, and should not be viewed as alternatives to measures of financial performance calculated in accordance with IFRS or considered in isolation or as a substitute for measures of performance prepared in accordance with IFRS. These non-IFRS financial measures should be read in conjunction with the Company's financial statements and accompanying MD&A.
Forward Looking Information
This release contains certain information which, as presented, constitutes "forward-looking information" or "forward-oriented financial information" within the meaning of applicable Canadian securities laws. Forward-looking information involves statements that relate to future events and often addresses expected future business and financial performance, containing words such as "anticipate", "believe", "plan", "estimate", "expect" and "guidance", statements that an action or event "may", "might", "could" or "will" be taken or occur, or other similar expressions and includes, but is not limited to, statements relating to:
UrtheCast's expectations with respect to: closing of the UrtheDaily  Financing and beginning of the UrtheDaily build phase; the current and future results of the strategic review process undertaken by the Special Committee of UrtheCast's SAR-IP and engineering talent; and interest expressed by third parties relating to the SAR-IP technology; opportunities to renegotiate current and future customer contracts;  and the Company's ability to continue as a going concern. Such statements reflect UrtheCast's current views with respect to future events. Such statements are necessarily based upon a number of estimates and assumptions that, while considered reasonable by UrtheCast, are inherently subject to significant uncertainties and contingencies. Many factors could cause UrtheCast's actual results, performance or achievements to be materially different from any future results, performance, or achievements that may be expressed or implied by such forward-looking statements, including, among others: any delays or failures in the design, development, construction, launch and operational commissioning of the OptiSAR™ or UrtheDailyTM constellations; the Company being unable to adequately finance the development, building, launch and commissioning of the UrtheDaily Constellation or to convert the remaining MOUs and other customer discussions in respect of the OptiSAR™ constellation into binding, definitive agreements; any failure by one of UrtheCast's third-party lenders to comply with the terms of their respective agreements with UrtheCast, and UrtheCast's ability to comply with any of its covenants thereunder; failure to obtain, or loss of, regulatory approvals; and uncertainty about UrtheCast's ability to continue as a going concern; as well as those factors and assumptions discussed in UrtheCast's annual information form dated April 2, 2018 (the "AIF"), which is available under UrtheCast's SEDAR profile at www.sedar.com. UrtheCast undertakes no obligation to update forward-looking statements except as required by Canadian securities laws. Readers are cautioned against attributing undue certainty to forward-looking statements.