Ed Lu's Journal: Entry #11: Dark Side of the Earth

Some of the most incredible sights you can see from up here are on the dark side of the Earth, when the Sun doesn't dominate the sky. I like to go down into the docking compartment and turn out all the lights and watch the nighttime sky through the two portholes there. Just like at home, if you are indoors looking out through the window when all the lights are on inside, it is very hard to see the stars. Your eyes are adjusted to the bright interior, and besides all you can usually see is glare off the window. After turning off the lights, it takes a few minutes for your eyes to adapt to the dark, and slowly the stars get more and more distinct. These past couple of weeks the moon has been close to a new moon, so without the light from the moon, the stars seem even brighter.

The view is something close to what you might see on a very dark mountaintop on a very clear night. Only better. Our solar system is located midway out from the center of the big disk of stars that is our galaxy. When you look in the directions along the disk you see more stars than if you look perpendicular to the disk. This is the Milky Way - the line of stars, gas, and dust that cross the sky, and it is incredibly distinct when viewed from here. We have a pair of image stabilized binoculars (that work by suspending the prism in some sort of fluid so it smoothes out the jitter), and through those I like to look at the various nebula and star clusters you can see when looking towards the center of our galaxy along the Milky Way. In truth, the view of all these objects is better with a real telescope on the ground than with my handheld binoculars, but there is something really cool about floating in a spaceship looking at all the stars!

It is fun to watch stars as they rise or set through the atmosphere as we circle the Earth. They start to twinkle as the light rays bend while passing through the uneven density of the atmosphere. Then, as they get closer to the actual horizon, they start to look orange and then red before blinking out. Sometimes they even turn green briefly. This is just the same effect that makes sunsets look orange and red (if you wonder why that is, it turns out that dust in the atmosphere scatters blue light better, so when the blue color is taken out of something that is white, it appears reddish). In fact, it is really just a star set - the only difference with a regular sunset is that in this case the star is much further away! Actually, astronomers sometimes use this technique to study the atmospheres of other planets as they cross in front of stars.

The bright red dot of the planet Mars has been a great sight recently, with Earth and Mars being very close now (relatively speaking). Here in low Earth orbit, we aren't significantly closer than you are on the ground to Mars, but without the atmosphere to look through it makes it clearer and brighter. It is bright enough that even when we are on the lit side of the Earth, and with all the lights on inside, it is clearly visible against the black background of space. With our binoculars or the high power lenses on the cameras you can see the disk of Mars, but we don't have anything onboard with enough magnification to really see the polar ice caps.

Closer to home, whenever we pass south of Australia at nighttime we get to see the green and orange curtains of the aurora. Since most of our mission has been during the summertime in the northern hemisphere, we haven't gotten to see much of the northern lights over Alaska since it has been mostly in daylight. Lately though, as the seasons are changing we are starting to get some nighttime views of the northern lights. About two months ago I saw something interesting, and still unexplained, when watching the aurora. We were south of Australia, and the sun had just set. I was watching Mars rise up through the atmosphere as we flew eastwards. The aurora was off to the right, and was fairly bright that day. A couple minutes after Mars had cleared the upper part of the atmosphere, I turned my attention to watching the aurora, when I saw a flash of light amidst the auroral curtains. It was a small point, but it was brighter than a typical star, maybe about the same as a 1st or 2nd magnitude star. It lasted maybe a second or so. Then I saw another flash, and then another - all together maybe five or six flashes over a period of about a minute or two. I'd never heard of anyone describe such flashes coming from the aurora, and in researching it further, I still haven't! Perhaps we've discovered something new. But first we had to rule out some other explanations. When the station crosses over the day/night line, we are at an altitude where we are in sunlight for a few minutes while the ground below is still dark. Small dust particles, which are continually shed by the Station, scatter the sunlight and are easily visible against the black background. You can see the same effect when looking at a sunbeam shining in through a window - you can see all the very tiny dust particles floating in the air. It turns out that some of the tiny particles (mostly paint flecks) that come off the Station are actually big enough so that they can look like a twinkling star as they float away and rotate. So when looking out the window at these times when we are in sunlight but the ground below is dark, you can often see little bright specks slowly drifting away from the Station. We were able to rule this out by finding out the exact time I saw the flashes. Our navigation experts in Mission Control were able to work out to the second when Mars rose above the horizon from our point of view, and using that we were able to say that the sun had already set several minutes earlier, so it is unlikely that I was seeing scattered sunlight from dust particles. Next, we wanted to rule out lightning (which is known to sometimes extend upwards - these are called sprites). I don't remember seeing any nearby lightning storms, but just to be sure we checked the weather maps and found that indeed the weather was clear. So that leaves us with a mystery. I've been watching the aurora carefully since then, but haven't seen this phenomenon again.

Well, since I only have a month and a half left before we come home, I better appreciate the view of the sky here while I still can! 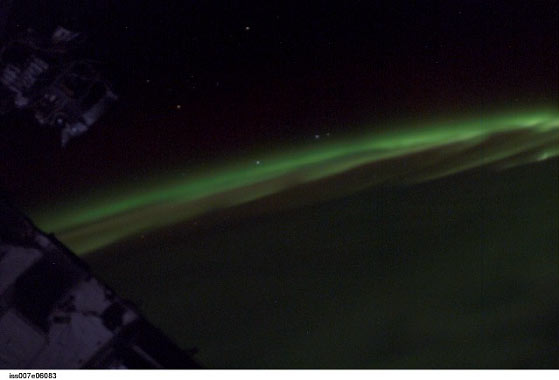 This is a photo of the aurora. You can see parts of the Space Station structure on the left. 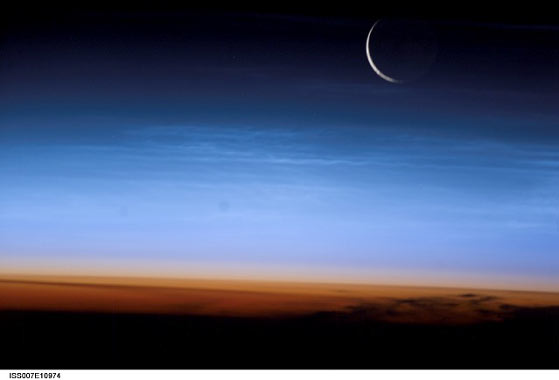 This is the crescent moon just over the horizon - taken with a telephoto lens. On this day there are rare high altitude clouds, known as noctilucent clouds. These are the silver looking clouds you can see above the orange color where most clouds are usually located. The dark bands in the orange section are the tops of thunderstorms, which extend up to about nine miles high.