Last week we had another Progress freighter arrive here (carrying fresh food!), so this week has been occupied with unloading and stowing away (or sometimes eating) the food, supplies, and equipment. The freight compartment of the Progress is roughly spherical and about 8 feet across, and is filled to the gills with equipment in aluminum containers or bolted to a metal framework. So to unload it we start near the hatch and begin burrowing in, unbolting things and pulling them out. The interesting part about working inside the Progress is that there is no "up" or "down" direction inside. There really isn't an up or down anywhere else here, but there is a direction we think of as the floor and a direction we think of as the ceiling in each module. Most of the labeling on panels and equipment is written so that it is right side up assuming this orientation, and also most of the lights are on the "ceiling" so they cast light "downwards." To add to the effect, there is a simulator back on Earth we spent a lot of time in where we got used to one direction as the floor and the opposite direction as the ceiling. So up here, when Yuri and I say downwards or upwards, we mean the equivalent directions as in the training module on Earth.

This isn't true for the Progress. Since it is just a cargo container, we don't have a simulator that we have trained in on the ground, and since it is spherical there really isn't a flat surface to call the floor. So that means that work inside Progress can be kind of disorienting. This is especially true if doing close-up work on something (say unbolting a piece of equipment). In weightlessness your body may shift position without you realizing it while you are intently working, so that when you pop your head back up after finishing you may find yourself in a totally different orientation than when you started. I recall looking out the hatch and being momentarily surprised to see Yuri in the Service Module running on the treadmill on the ceiling! Actually, it was me that had flipped upside down. I've had the same feeling before while scuba diving after looking down at something, then picking my head back up to find that everything had moved!

It is interesting how the same module can look like a completely different place when viewed upside down. Every once in a while here, I spend a few hours upside down just for fun, treating the ceiling like the floor. The familiar modules don't look so familiar anymore. This is true even though I am completely used to flipping my body around to whatever orientation needed to work on things. In space you need to remember that you aren't limited like you are on the ground to having your feet on the floor - they can just as easily be on the wall or on the ceiling. I find that when I am working in a tight space, I don't really think about any particular direction as up or down, but when out in an open space like in the middle of a module I do. If for instance I am up on the ceiling, by concentrating I can make myself think of the ceiling as the floor. I really think it is a matter of just familiarity what you call up or down. An example is the area around our weightlifting exercise equipment, which is located on the ceiling of the Node module. I've gotten so used to spending time there in that orientation that I am more comfortable there upside down. I've also gotten used to looking towards the Service Module while I am working out and seeing Yuri upside down - or at least the opposite way since from his viewpoint - it is me that is upside down.

When flying around, I've found that it is sometimes easiest to think of which way to maneuver with respect to yourself, rather than with respect to the module. This is the same trick you have to learn when flying aerobatic maneuvers in airplanes; you have to stop thinking about which way is up with respect to the ground, and start thinking about which way to turn the control stick so that you (and your airplane) turn the direction you want. The reason, of course, for this is that when upside down, the direction that was left now becomes right. But if you think of it as turning towards your right hand or left hand, then it doesn't matter which way you are oriented. Sometimes the whole world really does revolve around you! 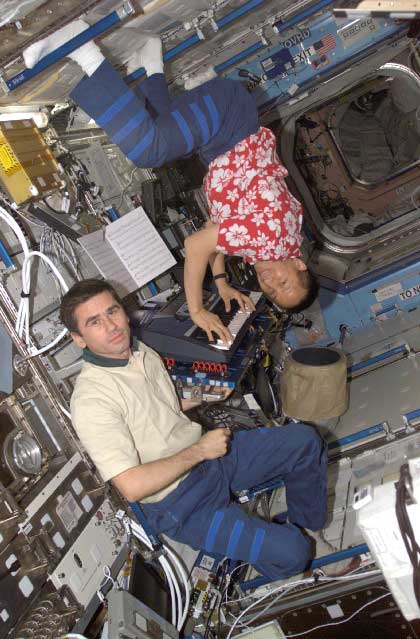 Which way is up all depends on which way you look at it. 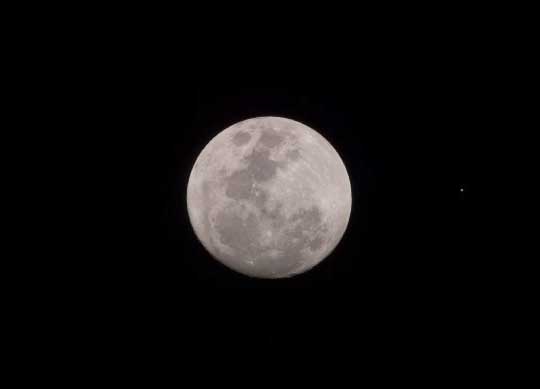 This picture has nothing to do with the topic, I just thought it was a neat picture. Last week the moon passed right by the planet Mars (the red dot to the right of the moon). If you zoom in on the picture you can see the polar ice caps of Mars. The interesting thing about watching this was that I could watch the moon appear to fly by Mars over the course of about 20 minutes. The reason, of course, was that the space station was moving. The moon and Mars are also moving, but their motion against the sky is fairly slow as seen from the Earth. So that was a sight only visible from orbit!