As noted in Space News (September 29, 2003) NASA and USGS have rejected the bid from Resource21 for the Landsat Data Continuity Mission (LDCM). This was the only bid submitted in response to the LDCM request for proposals. This decision, amplified by the current technical problems with Landsat 7, places continuity of the 30+ year Landsat observation record at significant risk. As representatives of the US land science community, we are increasingly concerned that our nation’s commitment to space-based monitoring our home planet’s land surface is weakening or may even be coming to an end. The Landsat mission first introduced this capability and its observation characteristics still provide the best means to examine the relationship between human activities and our terrestrial environment. With better than 30 years of observations already collected, we are now in an excellent position to pass on to the next generation a foundation for understanding the world they will inherit from us. With continuity of Landsat in jeopardy, we risk the integrity of this heritage.

We urge the decision makers in Washington to carefully consider how their current activities may be undermining the long-term Landsat mission. We are not in a position to understand or comment upon the political dynamics or financial details of the particular bid that Resource21 submitted to the LDCM RFP. However, there are several of us who carefully considered the technical details of the LDCM RFP process and the specific technical characteristics of the Resource21 submission to this RFP (Goward et al., 2002). We did this with the modest support of RESOURCE21, with the understanding that all details of our deliberations would be made available in the public record, as would be expected in any scientific dialogue. As a result of this commitment to open access, the results of our discussions contributed to the evolution of the LDCM data specifications. It is our view that the technical characteristics of LDCM, as called for in the RFP and proposed by Resource21, represent a substantial advance for the Landsat mission within the technical (and possibly fiscal) constraints that currently exist.

We are concerned that many interested users of Landsat observations have not had sufficient exposure to the LDCM specifications to appreciate the LDCM framework and what Resource21 proposed to the RFP.

The Resouce21 bid would have provided a satellite instrument that meets or exceeds the data requirements of the Landsat user community, with the exception that the thermal infrared measurements are not continued from Landsat 7. Resource21 bid a 185 km swath linear array sensor, based in part on the Advanced Land Imager (ALI) technology developed under the NASA New Millennium program and demonstrated on the Earth Observer-1 (EO-1). The sensor proposed has a range of advanced capabilities (Table 1) beyond Landsat 7, spectrally, radiometrically, spatially and temporally. Much of this is driven by the requirements of the commercial market place, which in general need a sensor system that performs better than the ETM+ instrument on Landsat 7. The proposed instrument was designed to satisfy requirements for a commercial capability with 10m spatial resolution. Data to satisfy the requirements of the scientific community at 30 m resolution were to be derived by aggregating the 10 m data. One of the benefits of such an approach is that it encourages technology advancement and thus the potential commercial value of the observations.

The spectral configuration of Chronos is substantially better than ETM+, excluding the absence of the TIR measurements. The sensor system includes 9 imaging bands (Table 2) dedicated to 8 portions of the spectrum. A driver of the new spectral design is to address atmospheric interference as effectively as possible. With the added dwell time of a pushbroom sensor, the increased signal-to-noise ratio permits band narrowing to avoid water vapor absorption. Bands have also been added to address aerosol contamination (blue1 & blue2) as well as cirrus cloud contamination. The red and near-infrared bands have been narrowed to enhance the visible near-infrared contrast recorded by most spectral vegetation index transformations (e.g., NDVI). In short, this sensor system represents a major technical advance over the previous Landsat Thematic Mapper , building upon the lessons learned from MODIS, ALI and other land sensing systems. 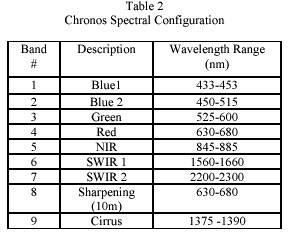 The entire Resource21 Chronos sensor design is based on mature technologies that are easily achieved by US sensor and systems fabricators. There is nothing high-risk in the proposed Resource21 design. Additionally it is important to note that the Resource21approach to LDCM provides the public with high-quality 30m observations (aggregated from the commercially viable 10 m native observations) that would be distributed through the USGS Earth Resources Observation System at the true marginal cost for fulfilling user requests (COFUR) anticipated to be ~$50 per 185 km by 170 km scene rather than the current $600 per scene cost. It is also worth noting that Resource21 found its discussions with the science community of sufficient value that it proposed to continue that dialogue through support of a not-for-profit Science Institute. This would have been analogous to the Science Team that had been associated with Landsat 7.

A Call for Action

NASA and USGS have already spent over 3 years on the LDCM process and, from our perspective, any possible alternatives to the LDCM concept likely could only be achieved in a 5-10 year time frame, given prior experiences with government procurements. The research community strongly supports a plan of action that will meet the objective of the LDCM RFP in a timely fashion. We recommend that: NASA & USGS immediately demonstrate and act upon a realistic, plan that maintains the Landsat data record continuity with the high quality observations that meet science needs. These observations should be comparable in quality to those represented in the LDCM data specifications. We urge the science community of Landsat data users to join us in expressing concern about the vital need for continuity of the Landsat data record and to ask NASA & USGS to demonstrate a feasible alternative plan for replacing Landsat 7 that approaches or exceeds the quality of the Resource21 proposal to LDCM as quickly as possible. We strongly encourage contacting colleagues, elected representatives and public officals expressing your concerns with the current state of affairs relative to continuing the Landsat heritage.