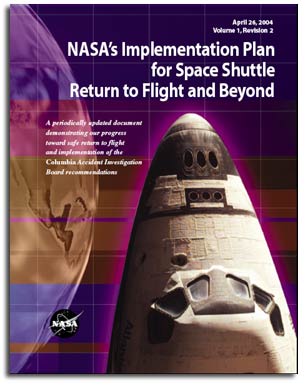 In January 2004, the President announced a new exploration initiative for NASA. This initiative is refocusing the Agency’s priorities on the ambitious goal of sending humans back to the Moon, to Mars, and eventually beyond. It has also refocused our existing human space flight program. Returning the Shuttle safely to flight is the first step in implementing the Vision for Space Exploration, and it remains our priority. After return to flight, the Space Shuttle’s sole mission will be the completion of the International Space Station. Following this task, planned for the end of this decade, the Space Shuttle will be retired. We are continuing to revisit and modify our long-term plans for the Shuttle as necessary to meet these new and exciting exploration goals.

NASA has made considerable progress in the past months in our return to flight efforts to make the Shuttle safer. We have taken the lessons of the Columbia Accident Investigation Board (CAIB) Report to heart as we reexamine and improve our vehicles and our processes. As a result, the rigor that we have applied to this process has required that we delay our planned return to flight date. Currently, our return to flight is scheduled for no earlier than March 2005.

Some of our key accomplishments include the decision to certify External Tank (ET) to proper debris allowables. Refinement of our understanding of the appropriate debris allowables led us to make additional modifications to the ET. Similarly, the Orbiter Boom Sensor System used to inspect the Shuttle’s Thermal Protection System will require additional time to perfect its design and operation. Finally, inspection of the Shuttle’s Rudder Speed Brake (RSB) actuators revealed some corrosion and two instances of improper assembly that will need to be resolved before return to flight.

The RSBs are representative of a family of issues that the Shuttle Program continues to pursue above and beyond the CAIB findings, observations, and recommendations, whose successful resolution have become the milestones pacing the schedule. These reflect our attempt to find and understand what the CAIB referred to as “unknown unknowns,” those issues that are difficult to anticipate, and for which we must remain vigilant.

When we return to flight, the Space Shuttle will be the safest it has ever been. We will have confidence in our ability to maintain that level of safety throughout the life of the Shuttle Program. We are confident that we can accomplish our role in the exploration initiative and complete International Space Station assembly in a timely fashion. We are fully complying with all of the CAIB recommendations by developing innovative means of mitigating the risk of those issues that we cannot solve directly by making supporting systems more robust. All of these solutions will undergo thorough assessment by the Stafford-Covey Return to Flight Task Group. They will also determine whether we have successfully met the intent of the CAIB Report and are ready to return to flight.

As we move closer to returning to flight, we are also moving into a new era of human exploration. The Space Shuttle has a critical role to play in these efforts. Our return to flight will enable the completion of the International Space Station and the expansion of critical research necessary for human exploration. While we do this, the memory of the crew of the Shuttle Columbia will continue to inspire NASA and our nation to achieve more, and to explore further. April 26,2004