Aboard the International Space Station, Expedition 10 Commander Leroy Chiao used a digital camera April 6 to photograph the rollout of the Space Shuttle Discovery at NASA's Kennedy Space Center from an altitude of 220 statute miles.

Chiao captured the rollout at 4:35 p.m. Eastern Daylight Time as the Station flew directly over the launch site. Visible in the image are the Shuttle's two launch pads at Launch Complex 39. Discovery's launch pad, 39-B, is on the left.

Chiao used the same lens arrangement for the photograph that will be used by the next Station crew to photograph Discovery's heat shield as it approaches the Station on its Return to Flight.

The imagery the Station crew will take of Discovery as it approaches is one of several new things that will be done to provide imagery to be used in assessing the health of the Shuttle. 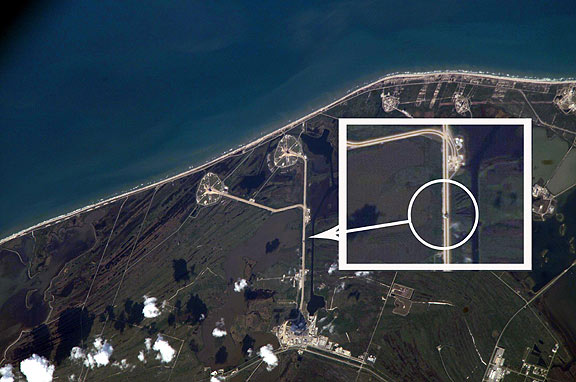