The June 26 issue of Nature features a report on the results of underwater research conducted with a pair of NASA Astrobiology-sponsored robotic explorers.

Members of the AGAVE team report in Nature that they found evidence of violent volcanic eruptions along the Gakkel Ridge, at depths of up to 2.5 miles (about 4,000 meters). From July 15-31, 2007, the expedition "surveyed the presumed eruption site" using suite of hardware including a multi-beam echo sounder, a sub-ice camera and sampling platform (CAMPER), and the Jaguar and Puma AUVs.

ASTEP sponsored the development of Jaguar and Puma as precursors to the sorts of AUVs that will be needed to explore deep, ice-covered oceans on other planetary bodies, such as Jupiter's moon Europa.

In addition to the NASA Astrobiology Program, sponsors of the AGAVE expedition include the National Science Foundation's Office of Polar Programs; the NSF Division of Ocean Sciences; the Gordon Center for Subsurface Sensing and Imaging Systems, an NSF Engineering Research Center; and the WHOI Deep Ocean Exploration Institute. 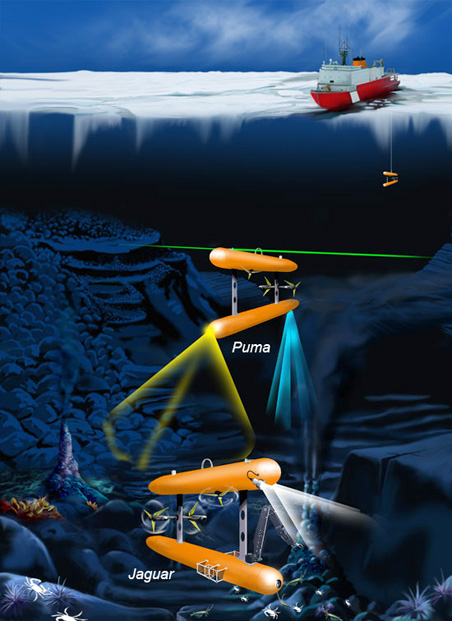