There are several regions on Earth where mean annual temperatures are well below freezing and yet liquid water persists. Such polar regions provide excellent analogs to study the hydrological cycle under conditions that have prevailed in the polar desert environment of Mars. In regions of continuous permafrost fluxes of energy and water are strongly linked. However most scientific studies of northern hydrology have been limited to surface process studies focusing on precipitation, snowmelt, evaporation, slope runoff and streamflow. The springs located at Axel Heiberg Island provide insights into the limits of physical and biological processes associated with groundwater in cold polar deserts. These qualities make them valuable as analogs for groundwater activity on Mars.

The Colour Peak springs (photo) are located on the south-facing slope of Colour Peak at an approximate elevation of 100 m ASL, emerging from the top of the slope along a line nearly 400 m long. These springs are grouped into 3 distinct topographically controlled areas with 20 vents discharging directly into Expedition Fiord three hundred meters down slope. Interestingly, the springs on Axel Heiberg Island flow all year with little variation in their temperature and are not associated with volcanic activity. 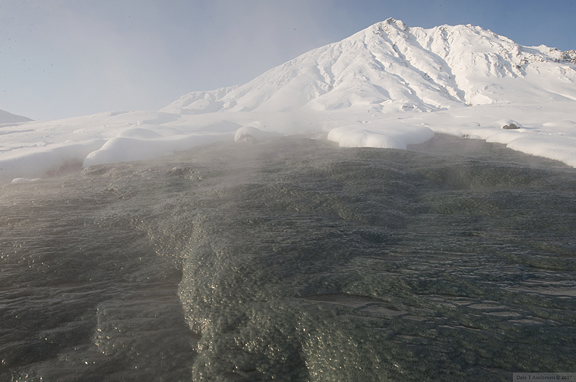 The McGill Arctic Research Station is located 8 km inland at Expedition Fiord, Nunavut, on Central Axel Heiberg Island in the Canadian High Arctic (approximately 79o26'N, 90o46'W). Established in 1960 on the shores of Colour Lake, M.A.R.S. is one of the longest-operating seasonal field research facilities in the high Arctic, providing access to glacier, ice cap, and polar desert and tundra environments. Researchers utilizing M.A.R.S. have accumulated the longest continuous mass balance record for any high Arctic glacier (White Glacier). Past and current research conducted at the various springs has been carried out with support of this facility.

Groundwater and the Search for Life on Mars

Despite the vast differences between the two planets today, Mars and Earth may have been much more similar early in their histories. If life developed on Mars as it did on early Earth it may have faced an untimely extinction as the cryosphere of Mars enveloped the entire planet, its atmosphere thinned and liquid water ceased to exist at the surface. Or perhaps it has retreated to subsurface refugia. Nonetheless, even when Mars was wet it was probably cold. Thus the hydrological cycle in the coldest regions on Earth provides the best analog for a Martian hydrology. From studies of springs, rivers and lakes in the polar regions quantitative models have been developed that show how liquid water could have persisted on Mars even if mean annual temperatures were below freezing. Springs, residual icings, pingos, and massive ground-ice deposits located in the Arctic (and Antarctic) provide opportunities to study microbial ecosystems in extreme polar environments.

The ranges in temperature, pH, redox, nutrient availability and the large seasonal variations in light have undoubtedly shaped the structure and function of the ecosystem as well as impacting the biological record left in the sediments. The planet Mars may have once hosted microbial ecosystems in a physical setting not too dissimilar to the Earth's polar regions. Determining the nature of the early martian climate, the existence of subsurface water, or whether Mars ever gave rise to life will be aided by studies of terrestrial microbial ecosystems in regions of thick, continuous permafrost.

Our work is supported in many ways and we would like to acknowledge the support for fieldwork by the Canadian Polar Continental Shelf Project, NASA's Exobiology program, the Canadian Space Agency, the McGill University High Arctic Research Station, and the Natural Sciences and Engineering Research Council of Canada. Additional funding for student research has been provided by the Department of Indian and Northern Affairs, Northern Scientific Training Program and the McGill University Centre for Climate and Global Change Research.