Juan Diego Rodriguez-Blanco (AMASE team): During the last decade of Martian exploration the research focus has primarily been on the search for liquid water, both using orbiters (Mars Global Surveyor, Mars Odyssey, Mars Express and Mars Reconnaissance Orbiter) and landers (Mars Pathfinder, Mars Exploration Rovers and the Phoenix lander). Obviously no liquid water can be found today on the Red Planet because the pressure of the Martian atmosphere is very low to permit water to exist on its surface. But from all the information sent from these orbiters and landers we know that liquid water existed on Mars millions of years ago.

The next rovers that will be sent to Mars will not look only for signs of liquid water. They also will have to accomplish a very complicated task: the search for past (or present) microbial life. Several very interesting candidate areas have been identified using orbiters that acquired spectroscopic signatures of carbonates and other minerals (clays, sulphates, etc.) that indicated that water must have been present during their formation. However, we don't know at all if microbial life developed in these regions or even if it could exist nowadays on the Red Planet. If we want to answer these questions we will need rovers that are able to drive long distances, analyze samples remotely and in situ, drill to take cores and, of course, obtain high-resolution pictures at different scales of the rocks, soils and sediments. 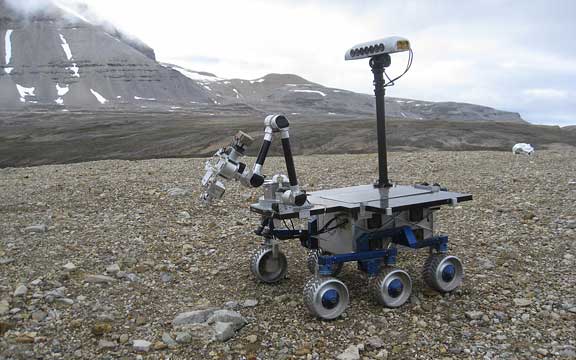 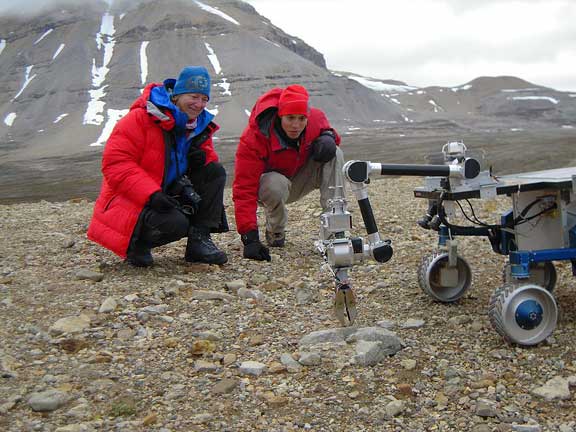 One of the strongest topics of research on AMASE 2009 is the testing and integration of new instruments for future rover missions to the Red Planet like the Mars Science Laboratory (NASA), ExoMars (ESA) or the Mars Sample Return (NASA) missions. To accomplish this task, different researchers with diverse instruments are participating in the AMASE expedition. In this blog I will focus on the rover on AMASE 2009 and on a group of people from the Jet Propulsion Laboratory that have been working very hard in Svalbard, one of the best Martian analogs of the world, together with the AMASE team to accomplish the science goals. The name of the rover is Athena. This vehicle, which has been tested during the last years in other areas, has a similar design to the Mars Exploration Rovers.

Image: Joseph Carsten operates the rover from his computer to collect a sample. One of the four cache boxes is ready for sample delivery. Credit: Paulo Younse (NASA/JPL)

For AMASE 2009 various tests and activities have been performed in Ny-Alesund and the Bockfjorden areas where basalts, carbonates and clays are present, which are all good analogues of possible Martian landing sites that future rovers will explore. This work has been carried out by Paulo Younse (Mechanical Engineer), Mike Garrett (Electrical Engineer), Joseph Carsten (Software Engineer) and Pan Conrad (Team Leader), all of them from JPL and also supported by a large group of the AMASE 2009 science team. 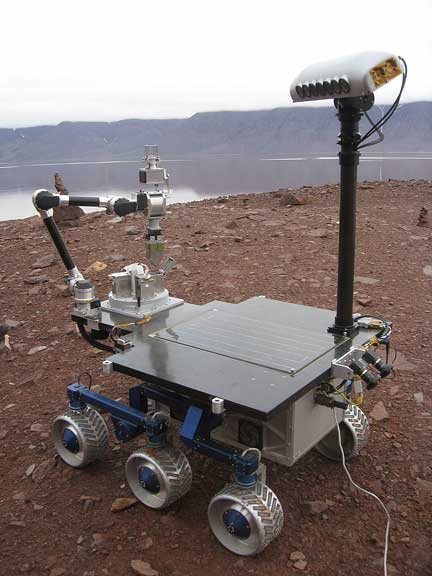 Image: A sample is going to be delivered to the cache box. The panoramic cameras are located on the rover mast and one of the two Hazcams can be seen near to the rover solar panels. Credit: Paulo Younse (NASA/JPL)

The rover operates with batteries to perform all her tasks. This year, Athena conducted sample acquisition and caching experiments. Athena used two sets of hazcams (one in the front and another one in the back), a navigational and panoramic cameras (with no filters this time, just to obtain BW images) and a robotic arm that includes a Microscopic Imager and a device to connect a set of 4 single use titanium scoops to take samples of soil or rocks. The rover also has carousel of four cache boxes to keep the samples and thus test possible scenarios for Mars Sample Return.

All these tests with Athena as an advanced mobility platform during the 2009 AMASE expedition were specially important because it is essential to test and develop technology that will eventually fly in future Mars missions. The next decade of Martian exploration is going to be very interesting but also very challenging, as the objectives that we are trying to achieve have profound implications towards our vision of life in the Universe. Developing and testing the appropriate tools to accomplish these objectives will be an obligatory requisite if we want to drive the road of success.

Image: A soil sample is now inside the cache box. The rover is about to close it using its robotic arm. Credit: Paulo Younse (NASA/JPL)