Juan Diego Rodriguez-Blanco (AMASE team): One of the 'fun science" activities we have carried out during AMASE 2009 is "iceberg chasing". Naturally this was all for a good scientific reason as we were interested in acquiring sediments trapped in calved icebergs for further characterization. Being in the arctic and around massive ice caps and glaciers it is no surprise that during the time we have been based on Lance we have seen tens of icebergs per day. Some of them are mostly made of blue ice but they sometimes also have layers of sediments and these are the interesting ones!

Blue ice occurs when the snow that fell on a glacier is compressed as a consequence of burying by more recent deposits of ice. This compression leads to the recrystallization of the ice crystals and thus they increase in sizes, permitting the light to travel slightly longer distances through it. As the light travels through the ice it is scattered, increasing the probabilities of absorption of both the red and yellow wavelengths, but not absorbing light at the blue end of the visible light spectrum. That is the reason the ice from glaciers is blue.

Therefore, when we see an iceberg that is made of blue ice, we know that it comes from an iceberg and it is not a recently frozen layer of sea ice. And that is our objective! 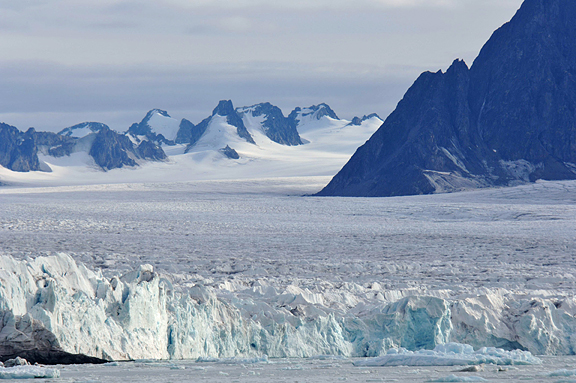 In fact we are not interested in the ice itself: what we want to obtain is the sedimentary material that is trapped inside the ice that has calved from the massive glaciers. During the formation of a glacier, sediments are trapped in the ice and there they may remain over thousands of years. However, if the glaciers reach the ocean and calve icebergs these icebergs may contain trapped sediments. The amount of sediment in ice that is delivered to the oceans by glaciers can be as high as 1500 tons per year. However, the most interesting point is the fact that within these sediments there are mineral nutrients that are extremely important to support biological activity and that during entrapment the sediments may transform and react despite the cold temperatures. In terms of mineralogical changes we are looking for phases that affect the iron cycle. 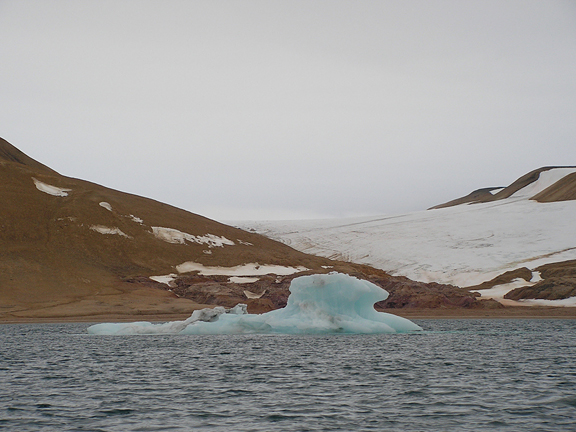 Iceberg made of blue ice floating in Wahlenbergfjorden. The darker areas are sediments trapped in ice. Credit: Juan Diego Rodriguez-Blanco.

So the task we have this year is: find a relatively newly calved iceberg, evaluate is it is safe to approach, find an interesting and safely reachable area with sediments, take samples, melt the ice and separate the sediments and than back in the lab study the sediments with different techniques (high resolution microscopy, X-ray diffraction, infrared spectroscopy, etc) with the specific question about the iron minerals.

However, the reader will wonder why we do not just go onto a glacier and take the samples directly instead of chasing icebergs. In theory that may be better, but in the real world it is quite difficult, because we need blue glacier ice not located on or near the surface of the glacier or subglacial ice that could in some cases be collected from glaciers that end in a moraine and not calve into the ocean. In a previous blog entry I described the SLIce project which is also part AMASE 2009, and where we retrieved ice cores from the surface layers of glaciers and to a maximum depth of 1-2 metres; those cores are more than enough to study the extremophiles that thrive in surficial glacial ice as well as the -mostly few- sedimentary particles that these micro-organisms use to obtain nutrients. However, if we would aim to extract ice from bigger depths the task would be technologically much more complex. However, luckily glaciers that calve into the sea do most of the work for us and thus when sediments from deeper areas are needed, it is better to take them directly from icebergs, because the material that is interesting for us is exposed but still trapped inside the ice. 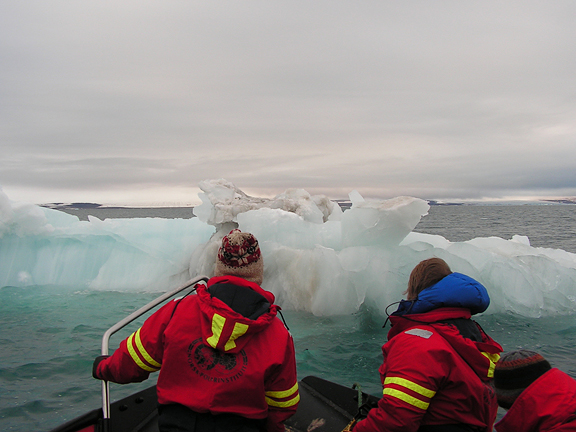 We need to approach the iceberg carefully for inspection and to be completely sure that it is safe to take samples. Credit: Juan Diego Rodriguez-Blanco.

How do we chase icebergs?

Very very carefully! As usual on AMASE safety is the first rule. Although seemingly a simple task, approaching and sampling floating icebergs can be risky. Depending on the size and shape of an iceberg, even the smallest amount of pressure on it surface could lead to an iceberg to rotate or to flip upside down. Naturally, if this would happen when we approach an iceberg with a zodiac boat that would not be safe. Because 90% of the iceberg's mass is under the water, its real size and shape is not easily evaluated, so we have to approach any iceberg carefully and evaluate whether we can safely obtain samples or not. If we see dirty blue ice, that means that there could be sediments waiting for us. So if the iceberg sampling is considered safe, the person that will take the samples will use an ice axe and a bag to catch the chipped of sections with sediments and ice. However, the 'sampler' will be secured by at least two people on the zodiac and the sampling will take less than five minutes/iceberg. 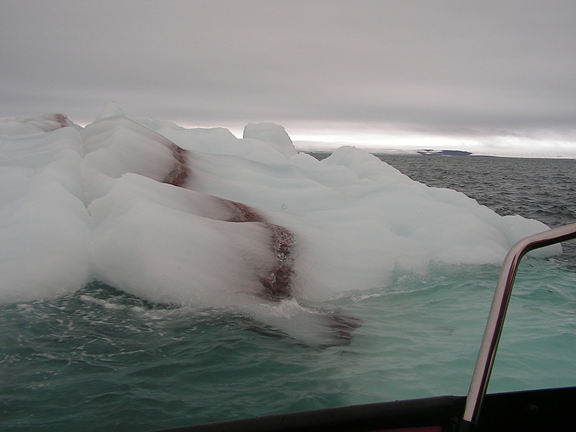 Sedimentary material trapped inside an iceberg. This is an extraordinary example, as most icebergs are not so 'dirty' as this one. Credit: Juan Diego Rodriguez-Blanco.

This year three iceberg chasing trips have been carried out successfully, obtaining a total of samples from different icebergs. These samples will be returned to the University of Leeds where they will be studied further with the aim to provide novel information about the contribution of glacially derived iron-rich sediments to the iron-budget of the arctic ocean and their link to bioproductivity in the current ocean and also with respect to the Last Glacial Maximum (LGM). The samples collected this year will be compared and contrasted with other iceberg samples that have been collected during previous years in Antarctica and the Southern Ocean. 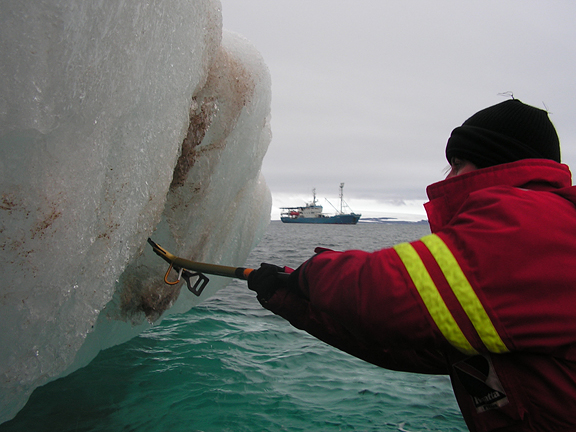 Taking samples from the iceberg with an ice hammer. Our ship, the Lance, can be seen on the background. Credit: Juan Diego Rodriguez-Blanco.