Imagine the following mission scenario: we have been able to send a Mars Sample Return mission to the Red Planet. A rover has characterized the landing site with many remote and contact instruments and has acquired a sample that has been successfully sent back to Earth. This sample, less than half a kilogram of material, could have potentially harboured life in the past on another planet. How do we study this sample in order to search for life?

How to search for life and how to know where it comes from!

During the AMASE 2009 expedition many samples from different areas have been obtained and characterized with different instruments to obtain chemical and mineralogical information, but naturally as we prepare for future "Search for Life' NASA and ESA missions, a crucial goal is also to test 'life' i.e., the biology is also one of our primary tasks. Most of the samples that were collected on AMASE come from a harsh environment where only extremophiles can thrive and yet, sometimes we are not even sure whether life could subsist.

Is it possible to find living organisms in high-pressure blue ice, two meters deep, where little liquid water can be found and the only nutrients are small rock particles and some diluted chemicals in the ice? Is it possible for 'life' to survive inside rocks better under extreme cold, dry and high-UV conditions? And if so how do organisms adapt and survive such conditions? These are the same questions that we will ask ourselves when we send the next generation of rovers to Mars. 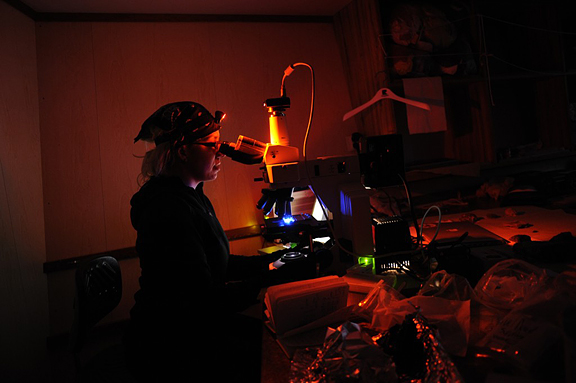 To assess the diversity of the microbial community structure in an arctic ecosystem our Bio-group - primarily Verena Starke, Mihaela Glamoclija and Adrienne Kish from the Carnegie Institution of Washington - have worked with different techniques and protocols, which include (1) standard genetic techniques to identify and characterize microbial populations (Polymerase Chain Reaction, PCR), (2) handheld life detection instruments, such as an ATP luminometer - which acts as an assay for overall metabolic activity, and (3) a microchip-based Limulus Amebocyte Lysate (LAL) assay that detects gram negative bacterial cell wall materials (living or dead) and (4) fluorescence microscopy to study stained cells.

All samples - weather rocks or ice, or biofilms, were tested for DNA and if found they were amplified using the PCR approach. Importantly the analyses were performed in the field using mostly general, but also gene-specific primers that indicate differences in overall community composition and activity among different sample types.

By characterizing organisms and their habitats, they were able to pinpoint relevant biosignatures and complement measurements acquired by the other instrument teams. When successful, biosignature correlations strengthen interpretations and may be particularly valuable in the search for life on Mars. For example, we have observed organics that play an important role in the development of life in areas where we would not expect to find them and living organisms (extremophiles) that survive in exceptionally harsh conditions. 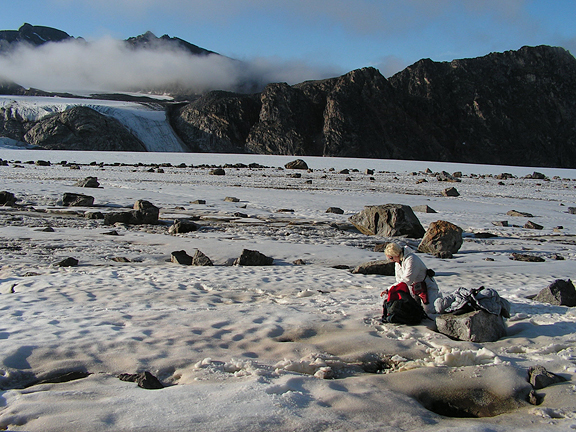 Image: cleanliness is the first concern when we taking samples for biological research. This picture shows Adrienne Kish (part of the SLIce team) keeping some samples during one of the field trips. Picture credit: Juan Diego Rodriguez-Blanco.

At the same time, this sort of research can raise a very basic but critical question: how do we know that we are not contaminating the areas we are studying with our own organics and microorganisms? How will we avoid contaminating Mars with "our own life" when we send a space probe there? The most embarrassing and uncomfortable mission scenario we can imagine is detecting life on Mars that actually survived the trip from Earth to the Red Planet. This task, which is related to "forward planetary protection" is really complicated but crucial and it has been addressed on AMASE since the expeditions began in 2003.

The efforts and multiple tests carried out in the last 3-4 years has been the basis for the development of a field-based cleaning protocol for sampling devices and tools. This work has been recently published in the July 2009 issue of Astrobiology journal. Obviously once this research study was completed and the protocol validated it was crystal clear that all instruments / sampling devices that we use for biological research on AMASE will always be strictly cleaned following this procedure.

Front cover of the Astrobiology journal with AMASE picture: http://homepages.see.leeds.ac.uk/~earlgb/Publications/Astrobiology_cleaning_rover_cover.jpg

AMASE 2009 was not an easy expedition to organize: many scientists working together with different backgrounds who need to transport tons of equipment, keep strict timetables, deal with logistics, schedules, accommodation... However, AMASE 2009 was successful because everybody did their best, both individually and also as a group, but also because there were people that worked really hard to make it happen.

We don't need to specify their names as we all know who they are and they know that we really appreciate their efforts. They used their personal time to put everything together, doing a great job in creating a really good working environment and make people feel comfortable and confident both in the success of their individual research tasks but also with "life" in an unusual environment like the Arctic. And they did well. AMASE 2009 could not have been better: people, science and last but not least impressive and unforgettable landscapes.

Now, more than a month after the expedition is over the science naturally continues. Analysis of the data obtained in Svalbard is on course and further sample characterization in the various labs is going on furiously. The results are slowly but surely being obtained, abstracts are being sent to different scientific conferences and papers are being written. 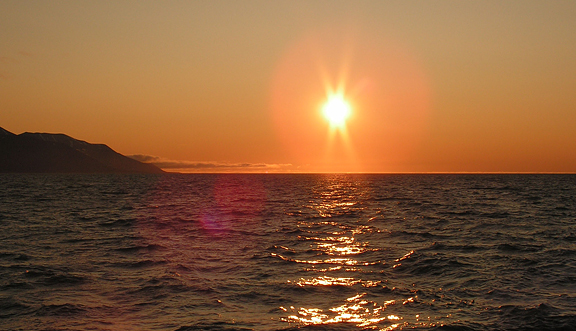 But our minds and hearts are still in Svalbard, which is not only a link with science, but a so beautiful and impressive landscape that we will never forget. The mountains and glaciers, the cold wind, the midnight Sun, the icebergs, the volcanic areas, the silence, the fog over the glacier valleys, the strangeness of a place that sometimes seems to have been taken from another world... all is magical and 'AMASEing'.

After finishing this great expedition there is no day I don't wonder how the landscape looks like today, how the weather is in Wahlenbergfjorden or in Bockfjorden, how far could we see from the top of Sverrefjellet volcano or how the landscape looks like in the glaciers near Ny-Alesund, now that the days are getting shorter. Svalbard will be in my mind for the rest of my life. I should be grateful. And I am. 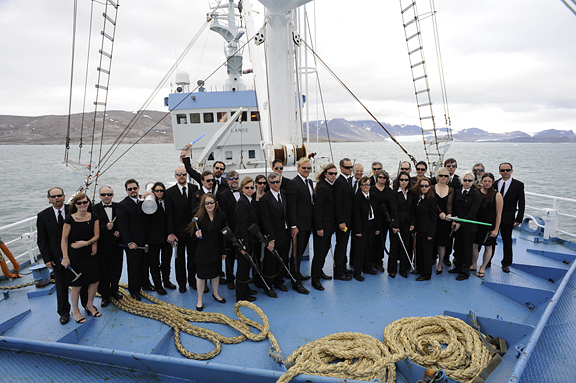 Image: 'Men in Black', the official photographs from AMASE 2009. Since 2003 AMASE has introduced a tradition: every year all participants have to dress as 'Men in Black' and for the official pictures. One of the pictures this year has been taken aboard the Lance, our ship, close to Ny-Alesund during the last day of the expedition. Picture credit: Kjell Ove Storvik. 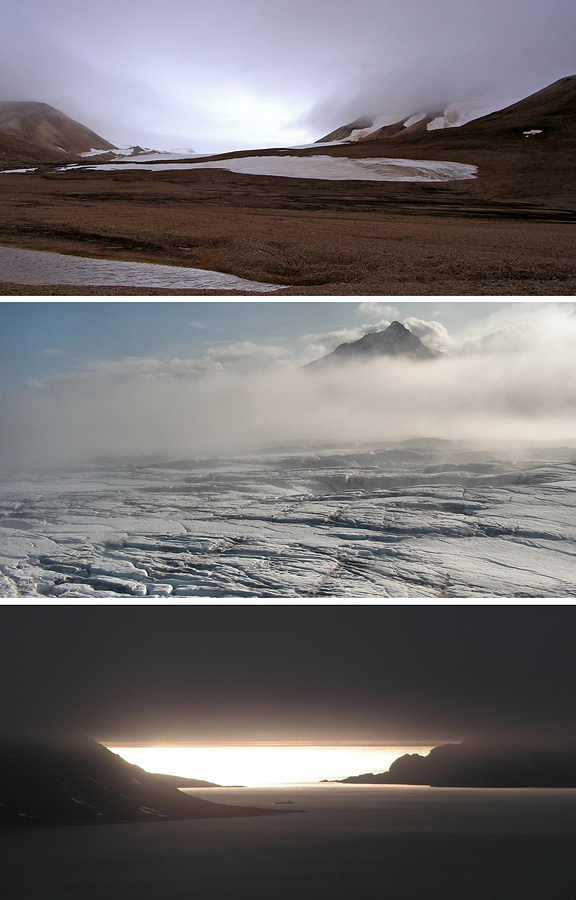 Image: Svalbard is a strange place. Some landscapes seems to be otherworldly and images may have been taken from Mars, but there are also glaciers full of cracks, crevasses and fractures that make you feel that you have landed on Europa (Jupiter's moon)... and when you fly by helicopter through the thick fog it seem to be that you are flying over Titan. From top to bottom: Mars, Europa and Titan in Svalbard. credit: Juan Diego Rodriguez-Blanco.