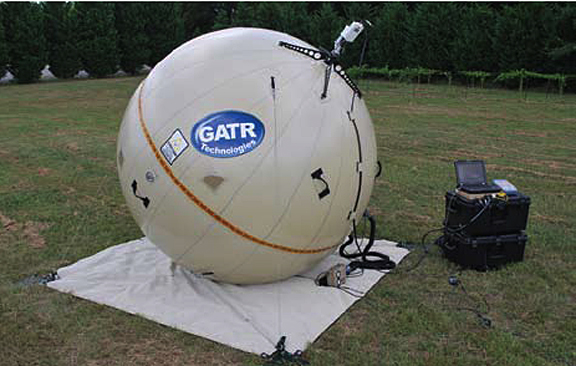 Image: This complete satellite communication system takes about 45 minutes to set up and 15 minutes to take down. When deflated, the flexible antenna rolls up like a sleeping bag and fits in a case with the antenna bag, blower, hoses, and plates. A separate case holds the electronics, including a modem, spectrum analyzer, cables, computer, and power inverter. Each case weighs less than 90 pounds and can be checked as baggage on an airplane.

Space exploration requires reliable and efficient communication technology. One device currently under development is the inflatable antenna. Due to several unique characteristics--it is lightweight, easy to deploy, inexpensive, and requires low storage volume--inflatable technology is especially well-suited for space applications. Without requiring mechanical actuators or human assembly, something the size of a suitcase could be inflated in space to the size of a basketball court.

In 1960, NASA launched the first of its inflatable space structures in the form of large metalized balloons, the Echo satellites. These were designed to act as communication reflectors to transmit signals from one point on Earth to another. Echo 1A was successfully orbited and was used to redirect telephone, radio, and television signals. Increasingly powerful launch vehicles became available, however, and lightweight inflatable technology was temporarily shelved. In the 1980s and 1990s, interest was renewed due to the cost advantages of the technology, and the space shuttle STS-77 mission successfully deployed an inflatable antenna in space in 1996.

Paul Gierow, one of the engineers with SRS at the time, explains, "To make a solar concentrator, you point it at the Sun and focus the energy. The antenna is exactly the same thing, but instead of focusing it on the Sun, you point it at a satellite that is radiating radio frequency (RF) energy. Anything that focuses sunlight energy can typically focus RF energy," says Gierow.

With the help of SBIR funding, SRS modified the concepts and processes for ground-based inflatable antennas. "We came up with an idea to put an antenna in a ball, or sphere. Intuitively you don't think it will work, but it did," says Gierow.

GATR Technologies, of Huntsville, Alabama, was formed in 2004. GATR, which is an acronym for "Ground Antenna Transmit and Receive," licensed the technology from SRS and has provided additional product refinements leading to a ground-based satellite communications system. The company's efforts were enhanced by a U.S. Department of Defense award to mature the ground-based antenna system.

To test the new antenna, including testing of the system's performance for Federal Communication Commission (FCC) certification requirements, GATR entered into a Space Act Agreement with Glenn. As a result, the company gained additional technical understanding of the product and was able to achieve the world's first inflatable antenna certified by the FCC in 2008. This qualified the antenna for a variety of communication applications within NASA, other government agencies, and commercial entities. That same year, SRS and GATR received the "Tibbetts Award" in recognition of small businesses and SBIR support organizations exemplifying the types of business, economic, and technical development goals of the SBIR program.

Popular Science magazine also recognized GATR and designated the inflatable antenna as a "2007 Invention of the Year." In 2010, the system earned recognition as one of the "R&D 100" (a list of the top 100 inventions of the year), granted by R&D Magazine. Recently, the company entered into a new Space Act Agreement with Glenn to expand the antenna's frequency range and size, as well as to test and evaluate a larger antenna.

Since its start in 2004, GATR has sold 60 ground-based inflatable antenna systems. In 2010 alone, the company's goal is to produce 50 more systems. With just under 20 employees, revenue has increased from $3 million in 2008 to $5.6 million in 2009. Most recently, Inc. magazine featured GATR on their list of the top 500 fastest growing entrepreneurial companies in the United States.

Capable of providing Internet access, voice over Internet protocol, e-mail, video teleconferencing, broadcast television, and other high-bandwidth communications, GATR's inflatable antenna can be quickly deployed in remote, hard-to-reach areas. The complete system takes about 45 minutes to set up and 15 minutes to take down.

First, the system is anchored to the ground using cables and stakes. Then the four ground mounting plates are oriented toward the targeted satellite at the same time that the azimuth (east or west direction) is set. Using a low-power blower, the antenna then inflates, pointing toward the satellite.

Resembling a large beach ball, the antenna system is made of a flexible reflective fabric that is transparent to RF energy. As airflow to the upper hemisphere increases, it pushes the flexible reflector dish down into a parabolic shape. After that, the ball continues to act as a pressure vessel to help achieve the parabolic shape of the dish.

When deflated, the complete system fits in two airline-checkable cases that weigh less than 90 pounds each. The flexible antenna rolls up like a sleeping bag and fits in one case with the antenna bag, blower, hoses, and plates. The other case holds electronics, including a modem, spectrum analyzer, RF cables, computer, and power inverter.

"The fact that you can hand carry these communications terminals onto a roof and set them up rapidly is a main benefit of the technology," says Gierow, now the president of GATR Technologies. "If you tried to put a big rigid antenna on a roof, it would take several days."

The systems have been successfully deployed in missile ranges, severe weather, emergency response situations, and by soldiers at Fort Bragg, North Carolina. On a volunteer basis, GATR has used the communication systems to enable high-speed Internet and phone access during wild fires in southern California. After Hurricane Katrina, Gierow spent a week in Mississippi helping over 250 families and law enforcement officials with their communication needs. In January 2010, GATR provided Internet access to first responders and doctors following the earthquake in Haiti.

Used for contingency communication or backup communication when land lines are down or compromised, GATR systems have been deployed in the United States, Korea, Africa, Iraq, and Afghanistan. Popular with U.S. military and intelligence agencies, GATR recently signed a contract with the U.S. Navy, which will field the systems throughout the world.

The next step for GATR is to focus on two extremes--a small backpack version, and a large version that doubles the size of its current system. The small version aims to fit everything needed for a high-speed Internet connection into one backpack, including a fold-out solar array, communication gear, and antenna.

As for space-based inflatable antennas, the technology continues to evolve alongside ground-based systems, and will likely be fundamental to extended missions that require high data rates for space communication.