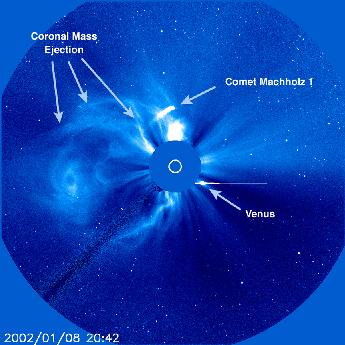 From January 6th through the 9th, 2001 SOHO watched the Comet Machholz 1 as it streaked by the Sun. This comet's path takes it near the Sun every five and a half years. It had a much brighter tail than expected, which became even brighter as it got closer to the Sun. But as a bonus, the planet Venus was also imaged as it passed behind the Sun and a coronal mass ejection (CME) blasted from the upper left edge of the Sun (with no apparent impact on the comet). Getting to see all three at once brought big smiles to the SOHO team. (The horizontal white lines extending out from Venus and the comet's head are caused by overexposure spreading out on the spacecraft's detector.)