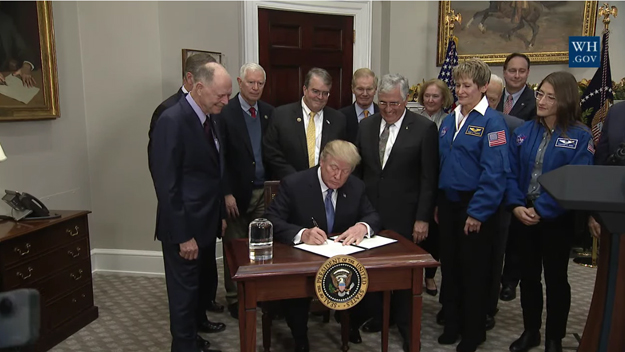 THE WHITE HOUSE
Office of the Press Secretary
For Immediate Release December 11, 2017

And especially, Mike, as I said, I want to thank you. I know how active you've been and how important this is to you. So we appreciate it. Thank you very much.

We also welcome astronauts Christina Koch and Peggy Whitson. Christina, thank you. Peggy, thank you very much. Peggy recently returned from the International Space Station and has now spent an incredible 665 days in space. You'll have to explain that. That sounds tough. (Laughter.) More than any other American; more than any woman ever.

Finally, we're honored to be joined by Apollo astronaut Jack Schmitt. Exactly 45 years ago, almost to the minute, Jack became one of the last Americans to land on the moon. Today, we pledge that he will not be the last. And I suspect we'll be finding other places to land in addition to the moon.

MR. SCHMITT: Yes, we should. Learn from the moon.

THE PRESIDENT: We'll learn. The directive I'm signing today will refocus America's space program on human exploration and discovery. It marks an important step in returning American astronauts to the moon for the first time since 1972 for long-term exploration and use. This time, we will not only plant our flag and leave our footprint, we will establish a foundation for an eventual mission to Mars. And perhaps, someday, to many worlds beyond.

This directive will ensure America's space program once again leads and inspires all of humanity. The pioneer spirit has always defined America, and we're picking that up in many other fields. I think you see that. I think it's obvious. All you have to do is look at what's happening with the markets and all of the great things that are happening. We're leading in many different fields again, and it'll get more and more obvious as you go along.

After braving the vast unknown and discovering the new world, our forefathers did not only merely sail home -- and, in some cases, never to return. They stayed, they explored, they built, they guided, and through that pioneering spirit, they imagined all of the possibilities that few dared to dream.

Today, the same spirit beckons us to begin new journeys of exploration and discovery, to lift our eyes all the way up to the heavens, and once again imagine the possibilities waiting in those big, beautiful stars if we dare to dream big. And that's what our country is doing again: We're dreaming big.

I'd like to invite Vice President Pence, if he would, to say a few words. He's been leading this for me and I appreciate it.

THE VICE PRESIDENT: Mr. President, thank you. Thank you for your leadership and thank you for the honor to be here today in my capacity as chairman of the National Space Council for what I believe is a momentous occasion in the history of American space exploration.

To all the extraordinary leaders who are gathered with us today, to members of Congress, and the pioneers of space exploration who are gathered here, we thank you. We thank you for all you've done to serve our nation and expand the horizons of human knowledge and advance American leadership in outer space.

Mr. President, in signing this space policy directive, you are ensuring that America will lead in space once again. To guide this new era of American space leadership, President Trump has relaunched the National Space Council. And at the Councils inaugural meeting in October, we unanimously approved a recommendation to instruct NASA to return American astronauts to the moon, and from there to lay a foundation for a mission to Mars.

Todays action by President Trump makes that recommendation official national policy for the United States of America. As everyone here knows, establishing a renewed American presence on the moon is vital to achieve our strategic objectives and the objectives outlined by our National Space Council.

In pursuing these objectives, Mr. President, we will, as you said, enhance our national security and our capacity to provide for the common defense of the people of the United States of America. We will also spur innovation, as the space program has always done, Mr. President. Youve reflected on it often, and well see jobs created that we couldnt even imagine could be created today.

Well also ensure, lastly, that the rules and values of space exploration are written with American leadership and American values.

Mr. President, you've said that the pioneer spirit has always defined America. And by your action today, with this clear vision -- returning Americans to the moon, preparing to lead to Mars and beyond -- you're ensuring, Mr. President, that America will lead in space in the future and for generations to come. And I thank you for the honor of being a part of this.

THE PRESIDENT: This is very exciting and very important for our country. And it also happens to mean jobs. Jobs. And we love jobs too, right? Congratulations.

(The directive is signed.) (Applause.)

THE PRESIDENT: Thank you, everybody. Thank you very much.