NASA's newest Earth Observing System satellite, Aqua, is successfully providing data and engineering images. After more than six weeks on-orbit, the spacecraft and its six instruments are almost midway through their checkout period and are performing extremely well.

"These engineering images are great, which tells us that we have a healthy spacecraft and all instruments are performing nominally. Everything indicates that we are on schedule to go operational in early September," said Phil Sabelhaus, Aqua's Project Manager at NASA's Goddard Space Flight Center in Greenbelt, Md.

The sea surface temperature map from AMSR-E is indicative of the high level of detail the microwave imager will routinely provide even in the presence of substantial cloud cover. "After years of preparation on Aqua, I and hundreds of other scientists are thrilled to have the spacecraft launched and its Earth-observing instruments sending down high-quality data," said Claire Parkinson, the Aqua project scientist at NASA Goddard. "If all goes as planned, these data will lead to improved weather forecasts and a better understanding of Earth's climate system--especially the role of water in it." 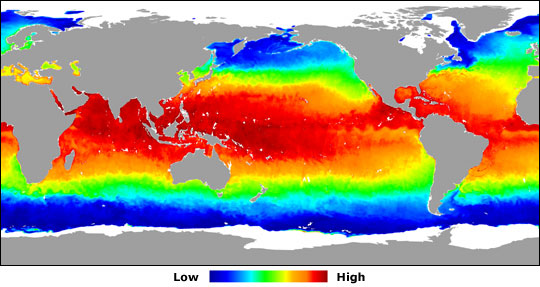 Aqua is an international partnership between the United States, Japan and Brazil. The primary role of Aqua, as the name implies, is to gather information about water in the Earth's system. Aqua will help us better understand and protect our home planet by answering science questions and meeting science goals through its suite of six high-performance instruments. Each instrument collects measurements on a different aspect of the Earth system - providing a holistic view of our home planet.

Aqua is part of NASA's Earth Science Enterprise. Through the study of Earth, NASA will help to provide sound science to policy and economic decision-makers so as to better life here, while developing the technologies needed to explore the universe for life beyond our home planet. Aqua launched May 4 from Vandenberg Air Force Base in California.

More information about the Aqua program is available at:

Information about NASA's Earth Science Enterprise can be found at: